I've been an ambassador for the Young Writers' Award for three years and once again there is an incredible shortlist, with varied themes including care homes, disability and immigration. I'm delighted to announce the shortlist. Congratulations everyone! 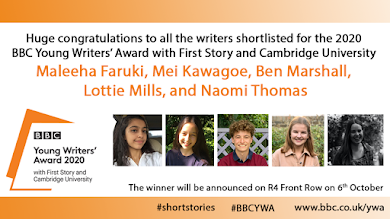 ‘Winds that Travel Across’ by Maleeha Faruki:

Over the course of a car journey, a father shares his memories of childhood, joys and hardships in India and the reasons he came to Britain. From frozen mountain peaks, to bustling bazaars and kitchens thick with the scent of lamb broth, this ‘effortless’ story was inspired by ‘people’s views on immigrants during Brexit’, a desire to reflect the stories that define us and the importance and humanity in individual experience.

In a highly imaginative and ‘fiercely evocative’ feminist retelling of a classic myth, Mei, whose writing has been performed at the Royal Shakespeare Company’s The Other Place, gives voice and agency to the kidnapped Persephone in this ‘visceral’ and rebellious story. Poetic and dream-like, it exposes societal constraints and the lessons girls are taught during childhood: to play small, be nice and not ask for more.

A ‘beautifully observed’ and ‘bittersweet’ story about family, loss and memory, Bingo Tuesdays was inspired by Ben’s personal experience of visiting care homes and the view that ‘sometimes care homes are where we discard the elderly’. Tender, emotionally mature and with a vividly realised sense of place, this story of a young man visiting his grandmother for their weekly bingo sessions was also inspired by memories of bingo sessions at Butlins, family experiences of Alzheimer’s and his grandparents love for each other.

‘The Changeling’ by Lottie Mills:

Previously shortlisted in 2018, Lottie Mills #OwnVoices story was inspired by frustration with ‘how difference, especially disability, is represented in fiction’. Reclaiming the myth of the ‘changeling’ and transforming it from something used to persecute and exclude into something magical, she explores disability via the fantastic in this ‘heartbreakingly well-written’ and ‘genuine triumph’ of a fable about a young girl’s extraordinary coming of age.

‘The Battle of Trafalgar Square’ by Naomi Thomas:

Described by judges as a ‘a punch in the face of a story, in the best possible way,’ an ordinary commute on a crowded tube train is transformed into a surreal and darkly, comic experience when a woman has an unexpected and shocking accident. Written as practice for Naomi’s English Language GCSE, the story exposes both the good and bad in human nature via a short story that highlights the power of the form to ‘give us a complete literary experience in and of itself’. An avid short story writer, Naomi was Highly Commended in the Young Northern Writers’ Awards 2020.