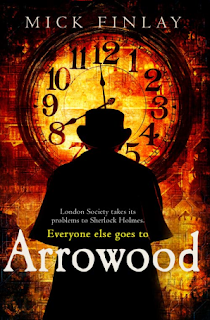 London Society takes their problems to Sherlock Holmes. Everyone else goes to Arrowood.1895: London’s scared. A killer haunts the city’s streets. The poor are hungry; crime bosses are taking control; the police force stretched to breaking point. While the rich turn to Sherlock Holmes, the celebrated private detective rarely visits the densely populated streets of South London, where the crimes are sleazier and the people are poorer.In a dark corner of Southwark, victims turn to a man who despises Holmes, his wealthy clientele and his showy forensic approach to crime: Arrowood self-taught psychologist, occasional drunkard and private investigator.When a man mysteriously disappears and Arrowood’s best lead is viciously stabbed before his eyes, he and his sidekick Barnett face their toughest quest yet: to capture the head of the most notorious gang in London. (Publishers' blurb)

When I read about this book on Twitter, I had to have it. It was such a creative idea to explore a less famous contemporary of Sherlock Holmes and the book has received great reviews. This is an adult book, instead of my usual YA, but I'm really glad I read it.

The world building was stunning, evoking the time period and London setting in detail but without weighing down the narrative. There was a real sense of unease with the recent, unsolved Jack the Ripper murders still playing on people's minds.

I also really liked Arrowood and Barnett, his sidekick and the novel's narrator. Their characters and relationship between them provided light relief but also touched on some emotional subjects.

The case was well-plotted and built to an exciting conclusion. I possibly missed some of the Sherlock Holmes references that other reviewers have mentioned but I still really enjoyed unpicking the mystery.

This was a promising start to a series and one that I'll definitely continue reading.

One of Us is Lying by Karen M. McManus - review 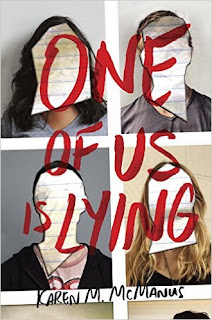 The Breakfast Club meets Pretty Little Liars, One of Us Is Lying is the story of what happens when five strangers walk into detention and only four walk out alive. Everyone is a suspect, and everyone has something to hide. (Extract from the Publishers' blurb)

I was so excited to read this book and it started off well. I found the premise of The Breakfast Club with murder so intriguing and the tension mounted throughout. However, there were elements of the plot that I didn’t enjoy and I would give a definite trigger warning about the treatment of depression.


The main characters were interesting and well-developed, though some of them defied stereotypes and others reinforced them. I liked reading about the events from four viewpoints and thought the four distinctive voices were very strong.


In terms of the thriller aspects, I found this book exciting and I enjoyed trying to work out the clues. It was so fun trying to decide who was lying and who was responsible. Unfortunately, there were plot points that I found disappointing and that stopped me from giving the book a higher star rating overall.


This book had great potential but for me it didn’t quite match up to the exciting premise and title. 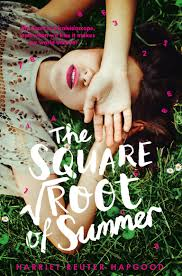 This book deals with subjects of grief and loss in a very sensitive manner but it may be triggering for some people.

Last summer, Gottie's life fell apart. Her beloved grandfather Grey died and Jason, the boy to whom she lost her heart wouldn't even hold her hand at the funeral. This summer, still reeling from twin heartbreaks, Gottie is lost and alone and burying herself in equations. Until, after five years absence, Thomas comes home: former boy next door. Former best friend. Former everything. And as life turns upside down again she starts to experience strange blips in time - back to last summer, back to what she should have seen then . . .
During one long, hazy summer, Gottie navigates grief, world-stopping kisses and rips in the space-time continuum, as she tries to reconcile her first heartbreak with her last. (Publisher's blurb)


The Square Root of Summer has been on my TBR pile for ages so the British Books Challenge was the perfect opportunity to read it. The challenge involves reading at least one British book per month. You can read more about it or sign up here.

This is a fantastic book with a lot of unique qualities. My favourite aspect is that it's about a girl who is a genius at Maths and Science. I wish that wasn't such a rarity in fiction and I hope this book encourages more authors to cover these subjects.
The book was also based on a very original concept. I love how it was inspired by Harriet Reuter Hapgood's German mathematician grandfather and her obsession with YA romance. I thought that these passions came across in the writing and that the deep issues were complimented well by the romantic story lines.

There was an interesting cast of supporting characters and I particularly liked Gottie's family. The descriptions of their relationship and their grief were dealt with in a very real, sensitive manner. I find this a difficult subject to read about and I thought this book handled it really well.

Another great thing was that Gottie felt like a real teenager. I think some YA books have the message that all romantic encounters are perfect and they don't always deal with the day to day reality of being a teenager. Gottie's relationships felt real and messy, and a standout moment for me was when she unexpectedly had her period. This was a definite theme of my teenage years and I'm so glad this book dealt with this subject so honestly.

This book has wide appeal in terms of the sci-fi and romantic elements and I'm looking forward to more books by Harriet Reuter Hapgood.

If you liked the sound of this, now try The Accident Season by Moira Fowley-Doyle.
Posted by YA Under My Skin 1 comment: 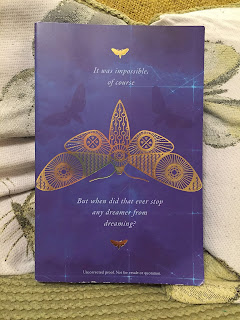