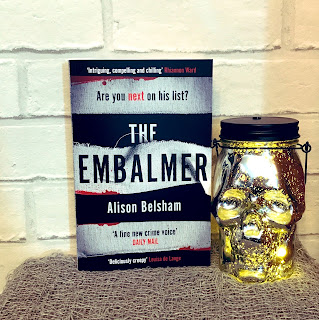 When a freshly-mummified body is discovered at the Brighton Museum of Natural History, Detective Francis Sullivan is at a loss to identify the desiccated woman. But as Egyptian burial jars of body parts with cryptic messages attached start appearing, he realises he has a serial killer on his hands. Revenge, obsession and an ancient religion form a potent mix, unleashing a wave of terror throughout the city. Caught in a race against time while battling his own demons, Francis must fight to uncover the true identity of the Embalmer before it's too late...

I haven't read any adult crime novels in such a long time, and The Embalmer has rekindled my interest. It's a tense, dark and inventive read with believable characters. I didn't realise it's the third in a series, and it's written so well that I easily picked up the story. I'm going to go back and read the others, but given the choice I'd read them in the right order.

I really liked how this book delves into the killer's viewpoint as well as following several main characters. It really enriches the narrative and is done in a way that's easy to follow instead of being confusing.

The premise of this is so fresh. I love ancient Egyptian history, so I found it really interesting how this is worked into the mystery.

The pace of this book is great! There are quieter moments between characters interspersed with mounting tension, and the narrative style of shifting narrators enhanced this.

The Embalmer is a thrilling read, and I'm excited about picking up the other books in the series!