The Selection by Kiera Cass - Review 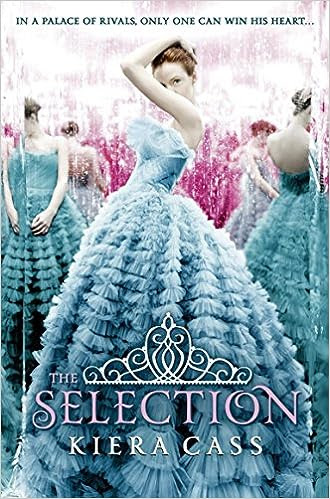 
It’s the chance of a lifetime and 17-year-old America Singer should feel lucky. She has been chosen for The Selection, a reality TV lottery in which the special few compete for gorgeous Prince Maxon’s love.
Swept up in a world of elaborate gowns, glittering jewels and decadent feasts, America is living a new and glamorous life. And the prince takes a special interest in her, much to the outrage of the others.
Rivalry within The Selection is fierce and not all of the girls are prepared to play by the rules. But what they don’t know is that America has a secret – one which could throw the whole competition… and change her life forever. (Publisher's Blurb)

I don't know why it took me so long to read this book, because I absolutely adored it! It only took me a couple of days to read and I've since read this second and third book in the series. This is a testament to how addictive and compelling these books are!

I really liked how this created a fresh take on the dystopian by tapping into the obsession with celebrities and the media. It's been a while since the premise of a dystopian has hooked me in like this one!

That is enhanced by Kiera Cass' amazing writing style. The pacing was perfectly balanced between action, romance and introspection, which kept me interested long after I should have gone to sleep...

The romance deserves a paragraph of its own. Sometimes love triangles grate on me but this one was meaningful and contributed to the conflict throughout. Maxon was a great love interest, with his own challenges and issues rather than being just more two-dimensional eye candy. I liked America as an MC and overall felt that she was a strong and sassy lead.

My only quibble with is that sometimes it felt like there was too great an emphasis on wealth and appearance. I get that this is escapism (and it really does this job terrifically well!) Sometimes there were moments when America was thinking about how pretty she felt etc. when she had more important things to worry about.

Another great part of this book is that America's competitors felt like relatable girls in a stressful situation, when they could easily have been portrayed as just bitchy obstacles to America's relationship with Maxon. By the end of this there was a real feeling of sisterhood and camaraderie between the girls and I loved that!

This was a super enjoyable read and I'll definitely check out the fourth and fifth book in the series.

Email ThisBlogThis!Share to TwitterShare to FacebookShare to Pinterest
Labels: YA books, YA Review