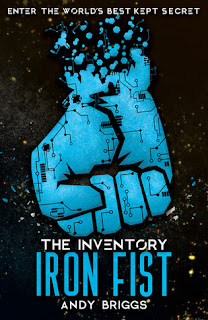 The Rules: if you find a secret inventory of utterly deadly battle tech.

What’s more secret than top-secret? The Inventory. Home to the deadliest inventions the world isn’t ready for. Invisible camouflage. HoverBoots. Indestructible metals. Plus a giant creature of chaos: war robot Iron Fist. No one has ever broken past the state-of-the-art AI security system. (Seriously, most bad guys have no idea this stuff is even there.)

Problem 1: the security robot wasn’t ready for a gang of kids wandering in.
Problem 2: they’ve ONLY brought the ruthless Shadow Helix gang in behind them. Seriously dumb, but it’s a bit late for ‘sorry’.

Say hello to trouble: the Iron Fist is in the wrong hands!


I'm so excited to kick off the 'Iron Fist' blog tour today and to host an interview with the author Andy Briggs. This is a brilliant, action packed middle grade for people who love Alex Rider and Percy Jackson as much as I do!


Please check out the interview and my glowing review below.


As technology plays such an important role in the book, what invention would you like to become a reality?

There are so many inventions I would like to see become a reality – such as teleportation (which would save me driving everywhere), jet-packs (if I don’t have a teleporter, then it would make flying a whole lot more fun)… or something to make me invisible!

But that’s a rather self-centred view because technology is probably our only hope in saving the world, and we are slowly making progress. Imagine generators that could create water out of thin air in arid famine hit regions – well, they are being prototyped. Or advanced purifiers that turn polluted water into drinking water – we have them. It extends to clean energy and other excellent inventions that make the world a better place, rather than merely a convenient one.

What was your favourite book as a child?

There are many, many books I loved. The Hobbit, Stig of the Dump, Arthur Conan Doyle’s The Lost World, to name just a few. However, if pressed, if asked about ANY book, then there is one book, one series, that you probably have never heard about and it’s sadly out of print. The series is called Captain Cobwebb, written by Gordon Boshell. In particular, Captain Cobwebb and the Red Transistor is the one book that comes to mind. I remember my brother getting if for me from the library when I had chicken pox. He delivered it by flinging the book from the doorway so he didn’t have to breathe my germs. And when I read it, it was a wondrous extraction from the real world.

I really had to think about this question as I didn’t think I did… but it turns out I do. When I start a project I always like to get myself a little present – a toy, figure, cool Lego kit – something that is vaguely connected to what I am doing. It provides a visual stimulus and, when I am stuck for ideas, something to play or chase the cats with. I also drink copious amounts of tea when writing. In fact it’s rare not to find a huge mug of tea next to my laptop. I love movie soundtracks and I create playlists that I listen to when I write, nothing with lyrics in, it has to be instrumental. I often find myself going back to particular tracks when I am writing action, or switching to something slower for more emotional moments.

If you could meet any author, who would it be?

I think my perfect author meet would be with the amazing Michael Crichton, who wrote Jurassic Park and sadly passed away in 2008. He had a superb grasp of technology and such a diverse range of interests that clearly impacted his writing He’s something of a role model for me! Despite his fierce imagination, I believe his best book was a non-fiction title called Travels. I heartily recommend it.

Have you got any ideas for your next project?

Too many. I have just written the first draft of the second Inventory book, out later this year, and will be starting book 3 soon. However, I have a couple of scripts I want to get done and have an idea for a new MG book I have wanted to write for a while now. It has had plenty of time to digest in my head, now I need to get it onto the page! Sadly, I can’t really tell you the details of any of them!

If you could be friends with any of the characters in Iron Fist, who would you choose?

Well, Dev is the main hero in the series and he’s something of an unusual boy with an odd gift – so he would be an interesting friend to have. However, Lot is the daughter of an Air Force test pilot and she is the kind of girl who doesn’t take any nonsense and is a bit of a thrill seeker. I think she’d be terrific fun… if a little scary sometimes.


A couple of years ago, I went through an obsessive middle grade action phase and read every Percy Jackson, Alex Rider and Artemis Fowl book. Since then, I’ve had a serious drought in this genre (until now). Iron Fist hooked me in right from the start and I gobbled it up in two nights.

There were so many great things about this book.

My favourite aspect was the multiple third person viewpoints. I love seeing unexpected perspectives such as friends of the main character and villains. I haven’t come across this in much middle grade that I’ve read and if it’s done this well I’d like to see more of it!

This leads onto my other favourite aspect – the characters. There was a brilliant and unpredictable cast to choose from, especially Lot. She flies planes and is all around tough and fearless (reminding me at times of Rey and Katniss).

I’m not always a fan of technology in books because I generally don't understand it. In ‘Iron Fist’ the technology seamlessly blended actual inventions with fictitious ones. I loved how the tech in this book was both accessible and integral to the plot. It made this book feel really creative and unique.

I’ve found it hard to think of anything I didn’t like about the book. The only idea that I came up with was that I would’ve liked to know more about the bad guys. Their backstories and motivations were hinted at but it might have been interesting to get to know them as well as I did the main characters.

This is my favourite middle grade book that I’ve read for a long time and I can’t wait for the next in the series! It's out today so buy it now!