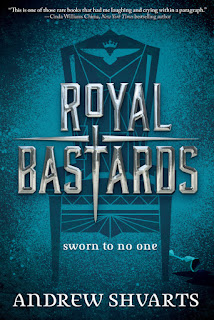 I received this book from Turnaround Publisher Services in exchange for an open and honest review. After sharing my thoughts, I have details of a fantastic (and very fun) giveaway from Turnaround.

Tilla, the bastard daughter of Lord Elric Kent, wants nothing more than to earn her father’s love and be legitimized as his true heir. But when she and a group of fellow bastards sneak out after a feast, they witness their parents, led by Tilla’s father, commit a horrific act of treason. Framed for a murder and sent on the run, the bastards band together, realizing they alone have the power to prevent a civil war that will tear their kingdom apart—if they can survive the journey...
Royal Bastards is described as 'Game of Thrones for teenagers' and I can't think of a more apt description. This book is also set in a richly imagined world and full of action, intrigue and romance.

For me, the main strengths of this book were the characters and the relationships between them.

I absolutely adored Tilla! Her longing for acceptance from her father immediately endeared her to me and it was great to watch her grow through the book. It made her feel very real that she was smart, confident and resourceful, but was also working out who she was. Her relationship with her half brother Jax was really refreshing. I seek out YA that explores sibling relationships and this book did that so well!

I also enjoyed the interactions and growing relationships between members of their group. Each character was developed in detail, with very different personalities and layers to uncover.

The plotting of this book was also brilliant. There was a real sense of imminent danger from their pursuers, which worked well against the background of the coming war. This gave the book a feeling of urgency and growing tension throughout.

The writing style was another aspect that I enjoyed a lot. Although the world had that Game of Thrones feel of being from another time, there was something modern about Tilla's voice that I really liked. It felt unique and also created many opportunities for humour.

This is one of the best fantasy books that I've read for ages. It's perfect for fans of Game of Thrones, Throne of Glass and Six of Crows.

It's now time for the giveaway. The lovely people at Turnaround Publisher Services are offering three people the chance to win a copy of Royal Bastards! To enter, you have to sketch an illustration of what you think a Skarrling looks like. The best drawing and closest likeness will win a copy of the book!

This quote might give you a hint to get started:

'Skarrling’s are said to make ‘a skittering clicking sound, like someone running their nails on a pane of glass…’
Simply send your drawings via Turnaround's Facebook or Twitter page (@turnarounduk) by 30th June to enter.
You can also find details of the giveaway here on Turnaround's blog and they have an awesome quiz where you can find out what character from the book is most like you. (I got Lyriana - which won't surprise people who know me!)
I hope you enjoy the book as much as I did and that you might be inspired to get drawing!
Posted by YA Under My Skin