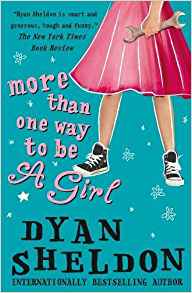 To celebrate today's release of More Than One Way To Be a Girl, the wonderful author Dyan Sheldon has shared her favourite books, movies and TV shows. I've just started reading my copy and it's the perfect mix of fun and humour, set against serious discussions about gender and identity.

I'll share a little bit about the book and then hand over to Dyan.

From the writer of Confessions of A Teenage Drama Queen and My Worst Best Friend comes this hugely entertaining teen read, all about what it really means to be a girl. ZiZi likes to think of herself as a girly girl: her wardrobe is almost exclusively pink, her daily makeup routine can take upwards of an hour and she loves a bit of a flirt. Her best friend Loretta is very different: all of her clothes are black, she doesn't wear any makeup whatsoever and she doesn't like the way ZiZi dumbs herself down for boys - or her old-fashioned ideas about "a woman's place". One day, they decide to make a bet. Can ZiZi stand looking like Loretta for longer than Loretta can bear dressing like ZiZi? As their summer unfolds - often hilariously - the pair are surprised to find they have a lot to learn from each other. (Publishers' blurb)

One of my all-time favourite YA books (though it’s definitely one that spans generations) is THE SECRET DIARY OF ADRIAN MOLE AGE 133/4. I’m not an expert on fictional diaries, but I can’t believe that anyone’s ever done it better. It’s funny, it’s warm, it’s clever, and it catches the time in which its set perfectly. What’s even better, is that there are more of Adrian’s diaries, following him into the future he never imagined he’d have – and they’re every bit as good.

Next up, is Patrick Ness’s THE KNIFE OF NEVER LETTING GO. This is the first book in his brilliant Chaos Walking series, and I have to say it’s my favourite. When I first read it I was, as they say, gob-smacked. It’s so complex, so bold and so original. Indeed, I can’t think of another book it even vaguely reminds me of – unless, of course, it’s the other two in the series.

CARNABY by Cate Sampson. This is the story of Sarah, who is not your typical YA heroine. Sarah lives in a falling-down council tower block in London with her mother, her sister and her sister’s baby. Sarah doesn’t have what you’d call a great life; and then suddenly it gets really worse. Her mother is murdered, and it falls to Sarah to find out by whom and why – and to protect her sister and herself. Part mystery, part thriller, and part social commentary, CARNABY is a book that stays in your head.

In Charley we have another untypical YA heroine. Born a slave in the American South, Charley finds herself adrift after the horrors of the Civil War and, in a desperate attempt to survive, disguises herself as a man and joins the all-black cavalry of the US Army, the Buffalo Soldiers. This is historical fiction at its best.

My very favourite teenager ever is Huck Finn. What’s not to love? Smart, sassy, and, above all, a boy who stands on his own, he is one of the best YA characters ever.

But right behind him comes Adrian Mole. An everyboy – or everyperson – if ever there was one.

I totally loved the two protagonists in Lisa Williams’ THE ART OF BEING NORMAL, David Piper and Leo Denton. David wants to be a girl, and Leo (who has been there, done that) just wants to be invisible. They are both such lovely people that you wish they lived next door.

I’m not going to give you the complete list, but it goes something like this:
CATCH-22 by Joseph Heller
THE WOMAN IN WHITE by Wilkie Collins
SLAUGHTERHOUSE FIVE by Kurt Vonnegut
PATCHWORK PLANET by Anne Tyler
WE ARE ALL COMPLETELY BESIDE OURSELVES by Karen Joy Fowler
MIDDLEMARCH by George Eliot
The Shardlake series by C J Samson
The Jackson Brody series by Kate Atkinson

I don’t watch much telly, but the TV show I can watch over and over and over again (and do) is Inspector Morse, followed closely by Lewis and Endeavour.
More recently, I’ve loved Happy Valley (absolutely fantastic with the most wonderful central character), Fargo and Broadchurch.

I am a major Wes Anderson fan. He is so unique and distinctive – so intelligent, compasisonate and so incredibly funny. His films are nothing like anyone else’s, to anything we usually expect.

Apocalypse Now, an adaptation of Joseph Conrad’s fantastic novel HEART OF DARKNESS that moved the story from the Congo in the late 1800s to the Vietnam War, is one of the greatest films ever. Even though the production was beset by a troop of problems from the weather to its lead actor suffering a near-fatal heart attack.

Thanks so much Dyan for your recommendations and thanks everyone for reading. You can find out more about Dyan's books here or buy More Than One Way To Be a Girl here.
Posted by YA Under My Skin