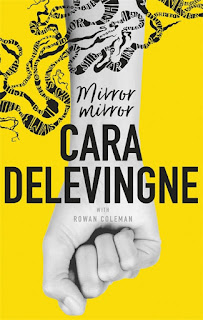 I received this book from Netgalley in exchange for an open and honest review.

Publisher: Orion Publishing Group (4th October 2017)
FRIEND. LOVER. VICTIM. TRAITOR.
WHEN YOU LOOK IN THE MIRROR, WHAT DO YOU SEE?
Sixteen-year-old friends Red, Leo, Rose, and Naomi are misfits; still figuring out who they are and who they want to be. Life isn't perfect, but music unites them, and they're excited about what the future holds for their band, Mirror, Mirror. That is until Naomi vanishes before being pulled unconscious out of the river.
She's left fighting for her life in a coma. The police claim it was a failed suicide attempt, but her friends aren't convinced. Will Naomi ever wake? What -­ or perhaps who - led her to that hospital bed? How did her friends fail to spot the warning signs?
While Rose turns to wild partying and Leo is shrouded by black moods, Red sets out to uncover the truth. It's a journey that will cause Red's world to crack, exposing the group's darkest secrets. Nothing will ever be the same again, because once a mirror is shattered, it can't be fixed. (Publishers' blurb)

This is a hard book to review. I read it really fast because I wanted to know what happened, and it made for a tense reading experience. At the same time, I didn't feel connected to the characters, which meant I wasn't fully invested in the plot.

I really enjoyed the sections where the band were performing or practising together, and I thought the ups and downs of their relationships were realistic. At the same time, I couldn't really relate to any of the band members, although I quite liked Red and Leo. My favourite character Ash wasn't even in the band, but I found her intriguing and I could read a whole Ash book quite happily.

The plot kept me engaged and there were elements that were unpredictable (though I figured a few things out).

Mirror Mirror was a tense book, and I liked the way it used elements from thrillers and contemporary novels.

If you liked the sound of this, now try One of Us is Lying by Karen M. McManus, which I reviewed here.