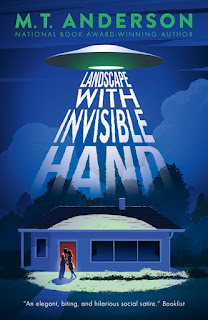 
When the vuvv first landed, it came as a surprise to aspiring artist Adam and the rest of planet Earth ― but not necessarily an unwelcome one. Can it really be called an invasion when the vuvv generously offered free advanced technology and cures for every illness imaginable? As it turns out, yes. With his parents’ jobs replaced by alien tech and no money for food, clean water, or the vuvv’s miraculous medicine, Adam and his girlfriend, Chloe, have to get creative to survive. And since the vuvv crave anything they deem ‘classic’ Earth culture, recording 1950s-style dates for them to watch in a pay-per-minute format seems like a brilliant idea. But it’s hard for Adam and Chloe to sell true love when they hate each other more with every passing episode. Soon enough, Adam must decide how far he’s willing to go ― and what he’s willing to sacrifice ― to give the vuvv what they want. (Publishers’ blurb)

It’s ages since I’ve read a book about an alien invasion and I thought this novella had an intelligent take on the subject matter, saying as much about our potential future as it did about what might happen during an invasion.

I really liked how the book had a realistic story about a relationship from the beginning to the end. Adam and Chloes’ responses to their situation felt authentic, especially Adam’s changing perception of Chloe as their relationship deteriorated.

Although this novella is short, the world is richly developed. It captured how the humans of this version of Earth became carried away by what the vuvv promised, without realising the impact on their lives. Adam developed an illness because of the living conditions of this world and I thought this was handled really well. He had terrible digestive problems that were presented in a visceral, realistic manner but with empathy as well.

Another thing I really liked was Adam's art. The book captured what it feels like to be creative, and showed how Adam used art to make sense of (and escape from) the world he lived in.

I devoured this book in a couple of sittings and I'd recommend it if you want a short, smart and thought-provoking read.