Renegades by Marissa Meyer – CHOOSE YOUR SIDE! 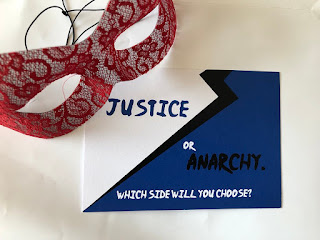 In the Battle for Gatlon City, you can pit yourself on the side of justice or anarchy. Will you join Chelley Toy from Tales of Yesterday, who would have you fight with the Renegades who control this city? Or will you join my rebellion alongside the Anarchists?

Chelley Toy wants you to... Choose the Renegades!

Join The Renegades! We emerged from the ruins of a crumbled society and established peace and order in a world full of chaos.

Twenty years of chaos created by Ace Anarchy and the Anarchists, The Age Of Anarchy. A time of no rules, no law and no repercussions. No police, no prison, looting and starvation. Some called Ace a visionary, but we called him a villain.

The Battle Of Gatlon was officially the end of the Age Of Anarchy, our Day Of Triumph. We defeated Ace Anarchy, he was dead and order was restored.

We, the Renegades, represent justice, a warm and promising hope. We are courage, bright and sparkling.

Do you have what it takes to be a hero? Are you bold valiant and just like Captain Chromium, Tsunami, Dread Warden, Thunderbird and Blacklight? Don your masks and capes and join us in our annual celebratory Renegades parade or compete in our annual Renegades Trials.

Remember – We’re the superheroes. We’ve got this. You are in very safe hands.

Chelle makes a very convincing argument. You could do what you're told, follow blindly and walk the dull and predictable path laid out by the Renegades.

They call themselves heroes and brand us villains. If you look back through history, there have been many other leaders who have disguised a dictatorship with flashy uniforms and empty promises.

What evidence is there that the Renegades are as virtuous as they claim? What have the Renegades ever done for you? Still, we have crime, and good people are lost, while the Renegades look down from their ivory tower.

With the Anarchists, you have a voice and you have a part to play. No ability is too small and no individual is unheard or forgotten.

The only way to mend society is to break it down and rebuild from the pieces. Why not be there alongside the Anarchists to create a new world, instead of letting the Renegades fight your battles for you?

Thank you so much to Macmillan Children's Books for asking us to write this post based on the wonderful Renegades by Marissa Meyer. Renegades is gripping story of superheroes like no YA I've read before, and you can check out my review here.

Thank you to Chelley Toy for getting involved and for letting me use the gorgeous mask photo!
Posted by YA Under My Skin