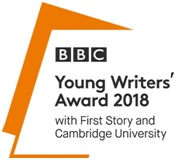 I'm thrilled to be an ambassador for the 2018 Young Writers' Award and to reveal the talented shortlist of writers. The winner will be announced on Tuesday 2nd October and you can listen to the stories on the BBC website.

SOCIAL ACTIVISM AND MENTAL HEALTH
INSPIRE THE WRITERS OF THE FUTURE AS
2018 BBC YOUNG WRITERS’ AWARD SHORTLIST
IS ANNOUNCED
www.bbc.co.uk/ywa

‘Sophisticated’, ‘mature’ and ‘awe-inspiring’: just some of the words used to describe the diverse and powerful stories that make up the shortlist for the 2018 BBC Young Writers’ Award with First Story and Cambridge University announced on BBC Radio 1’s Life Hacks show today (Sunday 23 September).

The five stories, inspired by a desire for socio-political change or personal experience of mental illness, were written by young writers aged 15 to 18 years old, with each showing a maturity of language and ideas far beyond their years. Whether it be the brutal life of a unwilling young poacher; the desperation and prejudice faced by a mother fighting to give her daughter a better life; the experience of loss seen through a child’s eyes; the guilt of unspoken words as a family struggle to cope with mental illness or the pain of a young girl watching her sister in the grip of anorexia –  the finalists have given powerful insight into the issues facing and motivating young people today and the importance of writing as expression.

Katie Thistleton, BBC Radio 1 and CBBC Book Club presenter and Chair of Judges, BBC YWA 2018 says:
“Writing is a such a powerful medium for change and the BBC Young Writers’ Award shortlist really reflects that. I host a social action show on Radio 1 and strongly believe the next generation are who we should be listening to. They question the status quo and their passion, energy and desire to be heard comes across powerfully in the stories we’ve seen this year. I’m really looking forward to seeing future work from this talented bunch.”

The stories, all under 1000 words, were praised by the judges for the poetic beauty of the writing and the imaginative power of the storytelling. Open to 14 to 18 year olds, the Award attracted 962 entries (a 67% increase from 2017).

·       ‘Under a Deep Blue Sky’ by Davina Bacon, 17, from Cambridgeshire. Inspired by Davina’s early childhood in Africa and her passion for environmental issues, this is the raw and emotionally powerful story of a young poacher and the brutal murder of a mother and baby elephant. Beautifully structured, parallels are drawn between the boy’s memory of his own mother’s death and the harsh realities of life where killing is his only survival option.
·       ‘Footprints in the Far Field’ by Reyah Martin, 18, from Glasgow. The pain of losing a baby is explored from the perspective of the child left behind in this evocative and moving portrayal of a mother’s all-consuming grief. An evocative and profoundly moving story.
·       ‘Unspoken’ by Lottie Mills, 16, from Hertfordshire. Unspoken explores the fragility of teenage mental health through the eyes of a girl watching her sister crying out for help while her family are in denial. A moving and powerful story that shows the isolation of those suffering and the vulnerability and helplessness of those watching from the outside.
·       ‘Firsts’ by Jane Mitchell, 16, from Dorset. A beautifully structured story of displacement told through the voice of a mother battling to escape the country of her birth to find a life of hope for her daughter; Firsts shows the desperation of the refugee and the prejudice that comes as a price of freedom.
·      ‘Oh Sister, Invisible’ by Tabitha Rubens, 16, from Islington, London. Oh Sister, Invisible is a poetic story of helplessness as a sister watches her sibling disappear with each passing season as anorexia takes hold. A story of grief, and of courage, it is intensely personal and conveys the unique power of writing to convey empathy and experience.

William Sutcliffe, adult and YA author and BBC YWA 2018 Judge says:
“I always relish the chance to discuss writing closely with other writers and with engaged readers. The debate among the panel was intense, and at moments a little fiery, but we ended up with a shortlist we are all proud of. The stories we have chosen reflect the talent and skill of the entrants and are a testament to the imagination and talent of teenagers who care about fiction. I was immensely impressed by the range of the writing and by the large numbers of stories seriously contending for a place on the shortlist. Those that made the cut are all remarkable.”

The five shortlisted stories are available to read and listen to on the BBC Radio 1 website www.bbc.co.uk/ywa

Mónica Parle, Executive Director, First Story, says:
“At First Story, we know from teachers and students alike that, for young people, writing about their lives and communities is a source of power and pleasure. This is borne out in our research: in 2016-17 every single teacher believed that participating in the First Story creative writing programme had improved students' wellbeing. It is therefore wonderful, but unsurprising, to see that the compelling stories shortlisted for this award explore personal and social issues about which their authors care deeply.”

The five shortlisted writers will attend the exclusive BBC Short Story Awards ceremony on
2 October 2018 at Cambridge University, when the winner will be announced live on BBC Radio 4’s Front Row and they will have the chance to meet high-profile authors, publishers, agents and broadcasters at the award ceremony. All five shortlisted writers will be given a private tour of ‘Virginia Woolf: An exhibition inspired by her writings’ at the Fitzwilliam Museum in advance of it opening to the public, and then meet Young Writers’ Award judge and fifth laureate na nÓg (Ireland's laureate for children's literature) Sarah Crossan for a writing workshop in Cambridge University Library. They will also receive a copy of the 2018 BBC National Short Story Award with Cambridge University anthology.

The winning story will be available on the Radio 1 website after the award ceremony on Tuesday 2 October, and will be available to download on the Life Hacks podcast from Sunday 7 October at 6pm. The winner will also receive a personalised mentoring session with an author to enhance their writing skills.

Dr Sarah Dillon, Faculty of English, Cambridge University, says:
“We are delighted to be welcoming the YWA shortlisted writers to Cambridge on 2nd October for the awards ceremony. They will get a real taste of what literary Cambridge has to offer, both at the Fitzwilliam Museum and the University Library. We hope they will be inspired to apply to study here, following in the footsteps of all the new students arriving in the School of Arts and Humanities that week for the new academic year and benefiting from Cambridge’s outstanding tradition of the study of literature and writing.”