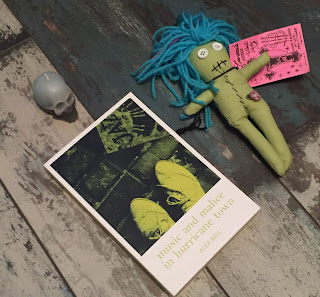 Jude Lomax scrapes a living playing the trumpet on the neon streets of Baton Noir. Then she is invited to play at the funeral of the infamous cajou queen, Ivory Monette. Passing through the cemetery gates, Jude finds herself possessed by the murdered queen’s spirit. And Ivory won’t rest until she’s found the person responsible for her death.

If Jude wants to be rid of the vengeful spirit, she must take a journey deep into the dangerous underbelly of the city, from the swampy depths of the Black Bayou to the velvet opulence of the vampires’ secret jazz clubs. But as Jude untangles Ivory’s web of secrets, she is confronted with a few dark truths from her own past…

I'm a huge fan of Alex Bell's writing so I was thrilled to receive an early copy of this book! If you haven't read Frozen Charlotte and the prequel Charlotte Says, they're deliciously creepy reads. Music and Malice in Hurricane Town is quite different but I enjoyed it even more.

The setting in this book is gorgeously described and so evocative. It's inspired by New Orleans and captured the city perfectly, as well as adding plenty of great fantastical elements and a compelling mystery.

Have I mentioned how much I love vampires? The Gothic and supernatural qualities of this book are written so well, with the creepy elements that I enjoyed so much in Alex Bell's other books. It's about time vampires made a comeback and Stripes Publishing are killing it, first with Whiteout by Gabriel Dylan and now Music and Malice in Hurricane Town.

Another brilliant thing about this book is the characters. Jude is an awesome main character, with plenty of agency, wit and bravery. I also really liked the cast of supernatural (and human) minor characters.

Music and Malice in Hurricane Town comes out on 4th April and is a gripping, brilliantly written book with touches of horror, romance and plenty of action.

Thank you Stripes Publishing for the review copy!