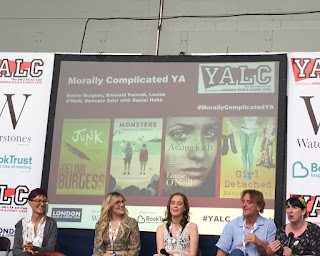 YALC 2016 is over and I've just about recovered! This was my third time there and again I had an amazing, packed 3 days! I squeezed a good balance of panels, seminars and signings, as well as meeting lots of great people who are passionate about books.

I've decided to do a summary of the YALC panels and workshops that I attended. As it's based on my hastily scribbled notes, any errors are my own and summaries are in my own words. It might be the longest blog post I've ever written so feel free to dip in and out of the bits that interest you!

As an incentive to read to the end, there are details of my Twitter giveaway of the fabulous Raven King signed by Maggie Stiefvater!

This was a fantastic chance to see the YA prize nominees. Relationships were key to the discussion and how they're important because as a teen you're forming who you are. On the subject of their chosen viewpoint, the authors had different approaches. Jenny didn't plan hers, whereas Lisa found that Leo's voice kept shouting at her! Sarah had written 30,000 words of prose before realising it wasn't working and settling on verse, which is a lot more time consuming!

In terms of advice for YA authors, Catherine recommended reading everything, even writing you think is rubbish. She said something like 'the youness of you and your take makes the story', which really resonated with me.

They each recommended a YA book: Sarah went for Needlework by Deirdre Sullivan, Jenny and Catherine recommended Orange Boy by Patrice Lawrence and Lisa recommended The Yellow Room by Jess Vallance.

Their take on content warnings was quite variable. Sarah wants to write about issues in a careful way that is palatable for teens, whereas Lisa trusts teens to self-censor.

Victoria Schwab, Taran Matharu, Sally Green and Melinda Salisbury – hosted by Catherine Webber
This was my favourite panel! All of the authors are fantastic and I got lots of practical writing tips.

They discussed their inspirations and Harry Potter was a big favourite! Taran was also inspired by Earthsea, Lord of the Rings, computer games such as Skyrim and based his monsters on Pokemon!

The discussion about the danger of making villains too powerful was fascinating. Taran is more worried about making his hero too powerful. Victoria is interested in how power could be limitless but it depends on the person's mental strength and personality. Melinda likes writing villains who are good looking and have the best power. They're her favourites and she secretly wants them to win!

I'm a huge fan of LA Weatherly's Angel series so this was a really exciting opportunity for me! Her workshop focused on using research to develop your settings and characters.

Her first point was that in a fantasy world you should make non-fictional aspects as real as possible. She uses Google Earth or visits locations when possible. She also likes researching characters' names and appearances after coming up with a concept. At first, it's a good idea to do broad based research and then more detailed, so you don't weigh down the narrative with technical information. The most useful advice for me was to think about the fantasy world as if it were this one. Pretend you're a newcomer. These things will grow into characters, which are a product of the world.

CJ Skuse the Writing Process
This panel was really inspiring – a fantastic blend of hints, advice and tricks.

From an idea or blurb, CJ plots a 3 ct structure. A rise in tension is the most important thing and the reason to read on. You should give obstacles based on what the character want and craft characters to root for and hate.

She always does 30 point planning. This is basically 30 scenes from your novel which gives a spine for the story. It's helpful to have a comparison to sell your book. E.g. CJ's new adult book was sold as Bridget Jones meets Dexter (how good does that sound?) If you're struggling for ideas, put your brain on the page. Put the core idea in the middle and inspirations, words, images and quotes around it.

When discussing whether revolution was core in conceptualising their books, Kass said it was in The 100. In YA, kids are trying to find agency, rebel against themselves and the world. Alwyn grew up in France and was inspired by studying the French revolutions. She felt in a fantasy context you can do bigger things with politics and you don't know how it ended like historical events.

There was some discussion of violent content. Simon felt that violence was integral in his book as it led to the riot. Kass wasn't worried about this. Her editor pushed her to be darker! Alwyn thinks violence shouldn't be gratuitous but teens will close the book if it's too much.

Very importantly, the authors discussed who they would want on their side in a revolution. Alwyn felt you would need different skills and went for Cat from Heist Society and Hermione. Kass opted for Neville and Anne of Green Gables. They'd understand that violence is a last resort and Anne would make everyone a nice cordial!

I had no idea what to expect from the title but this was really useful! Keris is inspired by the books she liked as a teen and real life. For example, she based one book about a real incident where her sister threw a party and her diary went missing! A really great exercise idea was to watch a film you love to write out the scenes and learn from the structure. She suggested getting story ideas from public places. Another useful tip was to talk to people and get sensitivity readers when you're writing diverse characters. Keris often starts with characters and the plot develops from there. Before writing, she knows the theme, arc and where the story will start and end.

This was an interesting discussion about the relationship between authors and readers on social media. They discussed how a lot of authors started in a fandom e.g. Simon Pegg wrote the new Star Trek and started as a fan. Some big books are even based on fan fiction – I was surprised to find that the Mortal Instruments started as Ginny and Draco fan fic (although I see it now!) Often tropes, themes and styles of fan fic appear in mainstream. The fandom community can influence positive change and bring issues to light such as the backlash against Age of Ultron writers after the portrayal of Black Widow.

This was a fascinating panel about what draws these writers to horror, what inspires them and their writing process. Dawn described horror as being like Pandora's box – you want to see what's in there but you can close it afterwards! Darren said the best deaths are simple and happen to characters that readers care about. Dawn is interested in people with their own demons who destroy themselves.

They felt horror is good again because the current generation of authors were raised on 70s and 80s horror. Darren likes 80s horror movies because they're old stories with a fresh spin.

The authors discussed the best perspective for horror. Derek feels there are advantages of first and third person. Dawn writes in both, feeling you can get in a character's head and mislead the leader with first person. Alex prefers third person for providing a broader canvas and can use it to get in characters' heads too. Darren likes the immediacy and personal nature of first person.

This was a great workshop about using movies as inspiration. To get rid of writers' block, Cat watches a movie or musical to soak up another creative medium. Her book Vendetta is Romeo and Juliet meets Goodfellas. She was keen to include family structures like the Sopranos, with characters you root for even though you shouldn't. She uses famous people as character inspiration and likes playing around with offbeat symbols such as the pot of honey foreshadowing death. Look at protagonists from films – why do you like them? What makes you root for them? What qualities do they have and why do they matter? It's important to have antagonists who usually have a cause and human qualities. Look at memorable moments from films – why are they memorable and what is at stake?

I love boundary pushing YA and this panel talked about why these authors write books like that and how it has affected them. Louise said she is always questioned about whether her characters are likeable – she feels this is a pressure real women face. She's interested in morally complicated women and pointedout that the male antihero is an established trope. Emerald felt obligated to be truthful and Manuela reflected on life being complicated and literature giving a way to understand that. The discussion emphasised being authentic as opposed to trying to shock. The authors agreed that book banning is covert and quiet. They felt there is a perception that violence in books is seen as more acceptable than sex. Louise pointed out that people don't want their kids to enter a violent reality TV show but want them to have happy, healthy relationships! Manuela made an excellent point that if something happens in young readers' lives she writes about it.

This was a very amusing panel focusing on the question Maggie was asked online about what a writers' day looks like. She used to be a professional portrait artist, which sounds romantic until you realise she spent a lot of time copying the masters with cats' heads. She feels she's a better thief than writer, visiting places and meeting people to get ideas. John Green asked her if she wanted to race on Twitter. He borrowed a race car which ended up setting on fire twice, perpetuating the rumour that Maggie set fire to John Green! I had to leave for Maggie's book signing at this point, which was a high point for my last YALC panel!
GIVEAWAY

It's fitting that I ended with Maggie Stiefvater's panel as I have a signed copy of the Raven King to give away! To enter, you simply need to comment on this blog post or follow and retweet the link to this blog on Twitter. You also get an extra entry if you follow the blog!

The winner will be announced on Saturday 13th August. 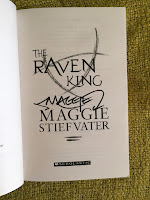 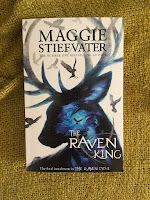