Vassa in the Night by Sarah Porter - review 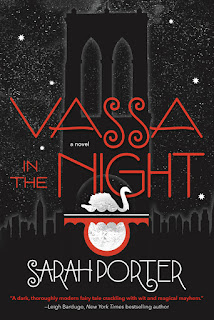 In Vassa's neighbourhood, where she lives with her stepmother and bickering stepsisters, one might stumble onto magic, but stumbling out again could become an issue. Babs Yagg, the owner of the local convenience store, has a policy of beheading shoplifters and sometimes innocent shoppers as well. So when Vassa's stepsister sends her out for light bulbs in the middle of night, she knows it could easily become a suicide mission. But Vassa has a bit of luck hidden in her pocket, a gift from her dead mother. Erg is a tough talking wooden doll with sticky fingers, a bottomless stomach, and a ferocious cunning. With Erg's help, Vassa just might be able to break the witch's curse and free her Brooklyn neighbourhood. But Babs won't be playing fair. Inspired by the Russian folktale "Vassilissa the Beautiful" and Sarah Porter's years of experience teaching creative writing to New York City students, Vassa in the Night weaves a dark yet hopeful tale about a young girl's search for home, love, and belonging.

This was my last book of the year and one of the most original that I've read all year. I didn't know much about this when it arrived in my Fairy Loot crate, but I knew I'd love it as soon as I read the blurb. I'm a sucker for a fairy tale retelling and I haven't read many as great as this one!

The plot is amazingly compelling, cleverly weaving in elements of the original folktale to create a suspenseful, wonderfully offbeat story. I got really invested in this and it was great that I didn't know where it was going. It's a while since I've read a book that delivers such an exhilarating string of emotional punches!

Much of the story plays out in the convenience store and I was captivated by this setting. The escalating magic and eccentric characters were a breath of fresh air, like nothing I've ever read before. Who would have thought I'd feel so strongly about a disembodied, enchanted hand?

The narrative structure was also really awesome! The histories of Vassa and her family are gradually unfolded and it's only by the very end that you get the whole story.

If you liked the sound of this, try Barefoot on the Wind by Zoe Marriott,a gorgeous feminist retelling of Beauty and the Beast.