It's great to be part of the Wing Jones photo tour! I've heard fantastic things about this book and I've finally got my hands on a copy. Wing Jones is the much anticipated debut novel from Katherine Webber, publishing 5th January 2017 in the UK. With a grandmother from China and another from Ghana, fifteen-year-old Wing is often caught between worlds. But when tragedy strikes, Wing discovers a talent for running she never knew she had. Wing's speed could bring her family everything it needs. It could also stop Wing getting the one thing she wants…

Katherine Webber was born in Southern California but has lived in Atlanta, Hawaii, Hong Kong and now in London. For several years she worked at the reading charity BookTrust, where she worked on projects such as The Letterbox Club which delivers parcels of books to children in care, and YALC, the Young Adult Literature Convention. You can find her on Twitter @kwebberwrites

Throughout January, over 40 bloggers will be participating in the #WJphototour – a photo blog tour documenting Katherine’s path to publishing her debut novel. From childhood memories that inspired her writing to her time living in Atlanta and Asia that influenced the book to authors she’s met over the years right up to receiving her first finished copy of the book, follow along to see Katherine’s author life unfold! Keep an eye on the hashtag to see the latest photos! 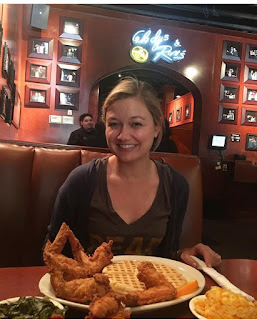 One of my favorite things about living in the South was the incredible food! Gladys Knight’s Chicken and Waffles was, and still is, one of my favorite restaurants in Atlanta. I love it so much that I put it in WING JONES.


Thanks for checking out my stop on the tour! Coincidentally, I've eaten at the same restaurant that this photo was taken in and I can vouch for how amazing it is! Follow the #WJPhotoTour hashtag to check out the other photos.
Posted by YA Under My Skin