The Edge of Everything by Jeff Giles - Review 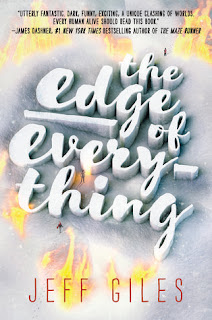 For the perfect love, what would you be willing to lose?

It's been a shattering year for seventeen-year-old Zoe, who's still reeling from her father's shocking death in a caving accident and her neighbors' mysterious disappearance from their own home. Then on a terrifying subzero, blizzardy night in Montana, she and her brother are brutally attacked in the woods--only to be rescued by a mysterious bounty hunter they call X.

X is no ordinary bounty hunter. He is from a hell called the Lowlands, sent to claim the soul of Zoe's evil attacker and others like him. X is forbidden from revealing himself to anyone other than his prey, but he casts aside the Lowlands' rules for Zoe. As they learn more about their colliding worlds, they begin to question the past, their fate, and their future. But escaping the Lowlands and the ties that bind X might mean the ultimate sacrifice for them both. (Publishers' Blurb)


I didn't know much about this book when I started it and I found it electrifying from the beginning! One of the best things was that there were high stakes and a lot of conflict from the outset.

I also found the concept of the book unique. I enjoyed the opportunity to explore X's life in the Lowlands and the moral battles he faced. This book went into some very dark places and didn't shy away from difficult subjects. I wasn't keen on a couple of plot points, but overall I found the story very strong and exciting.

Zoe is one of my favourite characters that I've encountered for a long time. I loved her relationship with her friends and found her to be a very complex, well-developed character. The teen voices came across as authentic (and were often very funny!)

I really liked the balance of action and romance in this book and the climax was excruciating (in a good way.)

I loved the contemporary feel blended with original, fantastical elements and I'm already looking forward to the sequel!