There's someone inside your house by Stephanie Perkins - review 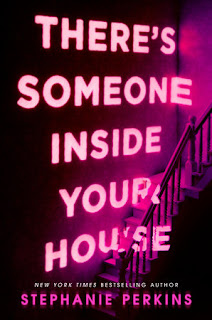 It’s been almost a year since Makani Young came to live with her grandmother in landlocked Nebraska, and she’s still adjusting to her new life. And still haunted by her past in Hawaii.Then, one by one, the students of her small town high school begin to die in a series of gruesome murders, each with increasing and grotesque flair. As the terror grows closer and the hunt intensifies for the killer, Makani will be forced to confront her own dark secrets. (Publishers' blurb)

This was the book I was most excited about at YALC and I was thrilled to get a copy. I’m a big fan of the 90s Point Horror series and slasher movies, but I haven’t read a recent YA along these lines. There’s Someone in Your House is a thrilling, gruesome book and I enjoyed every page!

One of the best things about this book was the pacing. It’s so cleverly plotted that there wasn’t a single moment where I got bored, or was pulled out of the narrative because something just didn’t make sense. A couple of plot points weren't quite as strong in my opinion, but overall it kept me guessing, and had me caring about these characters who may or may not be brutally murdered.

Even the minor characters who only lasted a few pages were really well developed, and I was never sure who was going to make it to the end of the book. I warmed to the core group of characters, and there’s an amazing romance that I was 100% behind.

The horror elements were also brilliant. It was gory in places, and tense all the way through. The book kept a really good balance of elements, so the lighter moments and romance were all the sweeter against the darkness and horror.

This is one of the best horror books I’ve read for ages and I really hope Stephanie Perkins writes more!

If you liked the sound of this, now try Cruel Summer by Juno Dawson.
Posted by YA Under My Skin