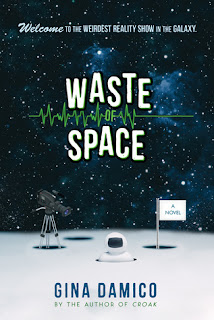 I received this book from Netgalley in exchange for an open and honest review.

Cram ten hormonal teens into a spaceship and blast off: that’s the premise for the ill-conceived reality show Waste of Space. The kids who are cast know everything about drama—and nothing about the fact that the production is fake. Hidden in a desert warehouse, their spaceship replica is equipped with state-of-the-art special effects dreamed up by the scientists partnering with the shady cable network airing the show. And it’s a hit! Millions of viewers are transfixed. But then, suddenly, all communication is severed. Trapped and paranoid, the kids must figure out what to do when this reality show loses its grip on reality. (Publishers’ marketplace)

This blurb really appealed to me but I didn't know what to expect. It ended up being a fun, unpredictable read.

The structure of this book felt fresh, as it was written like genuine documentation about the reality TV show. The voices of each different extract came across as very authentic, and were pieced together cleverly to create a cohesive narrative. It reminded me a lot of The Illuminae Files, even though the kids in this book aren’t really in space!

It was interesting how the book highlighted that the children were selected for the TV show because on the surface they represented certain groups. This provided a lot of opportunities to challenge stereotypes and flesh out characters as the book went on. The only downside of the cast size was that I didn't connect quite as much with the characters.


Another thing I really liked was the idea behind the book. It was original, current and executed brilliantly. The reality TV concept was a strong hook and the action definitely lived up to the idea. I loved how this book took some unexpected turns and I really hope there's a sequel!