Blood Will Out by Jo Treggiari – review 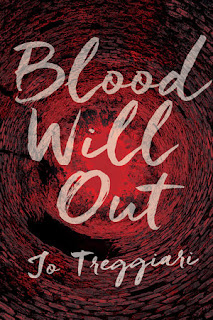 Ari Sullivan is alive – for now.

She wakes at the bottom of a cistern, confused, injured and alone, with only the shadowy recollection of a low-pitched voice and a gloved hand. No one can hear her screams. And the person who put her there is coming back. The killer is planning a gruesome masterpiece, a fairytale tableau of innocence and blood, meticulously designed.

Until now, Ari was happy to spend her days pining for handsome, recent-arrival Stroud Bellows, fantasizing about their two-point-four-kids-future together. Safe in her small hometown of Dempsey Hollow. But now her community has turned very dangerous — and Ari may not be the only intended victim.

This book has been described as Silence of the Lambs for young adults and that description was enough to get my interest. I love YA thrillers and I found this a tense, intriguing read overall, although the comparison with Silence of the Lambs is a hard one to live up to.

I enjoyed the alternating perspectives between Ari and the killer's viewpoints, as it's not something I've seen done in many YA books. Some readers might find the killer's sections disturbing, especially in relation to animal cruelty. I felt that overall the killer's backstory added another dimension to the story, offering clues about who they might be.

The plot kept my interest and had some scary and unexpected twists. In my opinion, some of the characters' motivations were a little hard to follow, but I found Ari's reactions to the events convincing and I rooted for her as a character.

I read this book in a short time because the overarching mystery kept my interest and there were some tense moments. I'd recommend this if you're a fan of YA thrillers and I'll definitely look out for more books by Jo Treggiari.