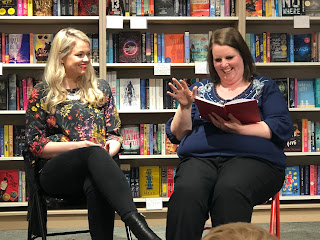 I was so excited to attend this event at Foyles Birmingham on Saturday to celebrate Femineaster and Laura Steven's amazing book The Exact Opposite of Okay. The event was chaired by the lovely Chelley Toy who blogs at Tales of Yesterday. Many thanks to Kevin Toy, who took these amazing pictures!

As well as being an author, Laura Steven is a journalist and screenwriter, and she works for Mslexia (a non-profit organisation that supports women in the creative arts).

When Laura started writing The Exact Opposite of Okay, it felt like being possessed and she heard Izzy's sarcastic voice in her head. The prologue that sets the scene for the book hasn't changed much since the first morning that she wrote it. At this point, she had the character and voice but not the plot. She actually got 50,000 words into a slightly different version of the plot. 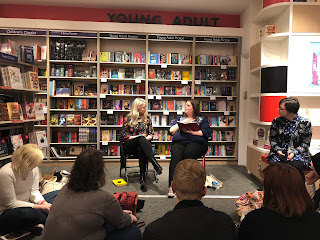 Aspects of the book were inspired by Laura's experiences. She had a horrible encounter with a boss who was inappropriate after university and wanted to inspire young women to speak up if they're ever in that situation. She also wanted to explore how the friend zone can turn sinister after a very creepy personal experience.

Chelle asked whether the portrayal of sex is still taboo in YA. Laura said she was prepared that certain 'gatekeepers' such as librarians might be swayed by the sexual content. Laura said she had to stick to her guns, to present what it's really like to be a teenager. She wanted to create a safe space where teenagers can read about sex and start conversations.


Writing in Izzy's voice felt like a natural fit as she's a caricature of Laura. It was easy to come up with the voice. Izzy is a very funny character but she uses humour as a defence mechanism, and Laura wanted to unpick why she does that.

She wanted to write an extroverted character because often these are the mean girls or the side characters but not the main characters. Her favourite character to write was Betty, the awesome grandmother who is Izzy's primary carer and openly discusses sex with Izzy! 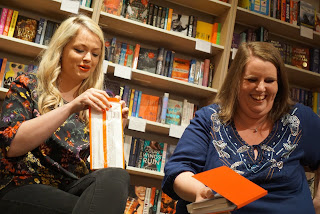 Laura intentionally included different types of humour in the book, such as Ajita's deadpan style. She wanted to write characters with distinctive voices, so if you took away the dialogue tag you would know who's speaking. Her aim was to write a book that would make her friends laugh! The beauty of writing comedy is that you can think about it and you don't need quick comebacks.

Her advice for writing humour is that giving ridiculous solutions to simple problems can be really funny! She also enjoys sarcasm, deadpan humour and satire, but it's hard to pinpoint sometimes exactly what makes a book funny.

The title came to Laura on that first day and a focus group of teens chose it over another title. The cover was designed by an illustrator that Laura really likes, who also illustrated Nicola Yoon's books.

One of her favourite comedy books is Angus, Thongs and Full-Frontal Snogging and she adores Georgia Nicolson as a character. Laura would have loved to collaborate with Louise Rennison, the author of this series. 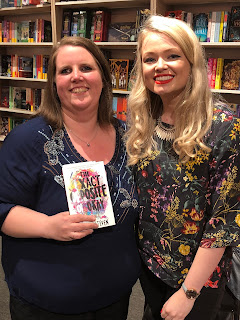 Laura's Hogwarts house is either Ravenclaw or Slytherin. Her patronus would be some kind of dog, and her official Pottermore patronus is a Saint Bernard.

She's working on several projects including a sequel and a spin-off set five years later and starring Ajita's younger brother!

This event was fantastic fun, with many laughs and peanut butter cups had by all! I'm halfway through The Exact Opposite of Okay and it's my favourite contemporary that I've read in ages - it's laugh out loud funny and very real about what it's like to be a teenager.
Posted by YA Under My Skin