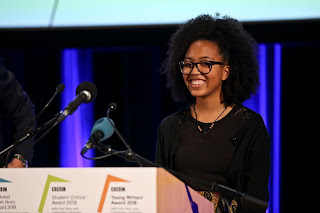 Davina Bacon from Cambridgeshire has won the 2018 BBC Young Writers’ Award with First Story and Cambridge University (YWA) for ‘Under a Deep Blue Sky’, a raw and emotionally powerful short story about a young African poacher and the brutal murder of a mother and baby elephant. Inspired by her early life living in Africa and her passion for the environment, Davina’s story was praised by author and judge William Sutcliffe as a ‘superlative piece of writing by any measure, regardless of the age of the writer’ and by fellow judge and actress Carrie Hope Fletcher, for its ‘compassion and intelligence’.

Citing Michael Morpurgo as an influence on her writing style and having recently read a lot of post-colonial literature including Chinua Achebe’s Things Fall Apart and Anthills of the Savannah, Davina Bacon’s winning story is inspired by her earlier years spent living in Malawi. She says: “My story is based on Kasunga National Park where they have issues with poachers crossing the border from Zambia to kill elephants. The population has decreased rapidly and this is very worrying.”

The news was announced live on BBC Radio 4’s Front Row (Tuesday 2 October) with ‘Under a Deep Blue Sky’ available to read and listen to on the Radio 1 website after the award ceremony, read by Don Gilet of the BBC Radio Drama Company. An interview with Davina will be available on the Life Hacks podcast from 5pm on Wednesday 3 October. Davina will also receive a personalised mentoring session with an author to enhance and further develop her writing skills.

Carrie Hope Fletcher, writer, actress and BBC YWA 2018 judge says:
“‘Under A Deep Blue Sky’ is one of the most surprising pieces I read during this competition. It was the only story to tackle the issue of poaching and wildlife and showcased the compassion and intelligence of a younger generation.”

Beautifully structured, ‘Under a Deep Blue Sky’ is the story of a young boy, whose only chance of survival after his mother’s death is to join a poaching gang. Parallels are drawn between the boy’s memory of his own mother’s death and the harsh realities of life where killing is, seemingly, his only option. Highlighting the challenges for the young in Africa while throwing a spotlight on the horror and brutal dispassion of the ivory trade, Davina’s story shows the capacity of the short story form to convey empathy, experience and, hopefully, change in relatively few words.

Mónica Parle, Executive Director, First Story, says:
“From the first word on the page, Davina Bacon’s story will grip you and envelope you. It’s astonishing to witness such a command of language, description and place in such a short space of time, and I am struck by how powerfully she expresses personal grief and loss through a connection with the natural world. This is a young voice to watch, and we at First Story are delighted to see Davina gain wide readership through this award, which is at the forefront of discovering new, fresh talent.”
William Sutcliffe, adult and YA author and BBC YWA 2018 Judge says:
“The winning story is a superlative piece of writing by any measure, regardless of the age of the writer. The characterisation, setting and narrative are richly and intelligently put together. Every sentence is polished. To fit a story of this power and depth into a mere thousand words is a serious achievement. Davina deserves to be very proud of her work. I look forward to seeing what she writes next.”
Davina beat off competition from Reyah Martin, 18, from Glasgow for her evocative and profoundly moving story of a mother’s grief, ‘Footprints in the Far Field’; Lottie Mills, 16, from Hertfordshire for ‘Unspoken’, a compelling and lingering story about the fragility of teenage mental health and a family in denial; Jane Mitchell, 16, from Dorset for ‘Firsts’, a beautifully structured story of displacement told through the voice of a refugee mother seeking a better life for her daughter and Tabitha Rubens, 16, from Islington, London whose deeply poetic ‘Oh Sister Invisible’ tells a story of courage, grief and helplessness as the narrator watches her sister disappear as anorexia takes hold.

All five shortlisted writers spent the day of the award ceremony at Cambridge University where they met Young Writers’ Award judge and fifth laureate na nÓg (Ireland's laureate for children's literature) Sarah Crossan for a writing workshop in Cambridge University Library. They were also given a private tour of ‘Virginia Woolf: An exhibition inspired by her writings’ at the Fitzwilliam Museum before attending the award ceremony where Trinidadian writer Ingrid Persaud, was announced as the winner of the thirteenth BBC National Short Story Award with Cambridge University for her story, ‘The Sweet Sop’.

Dr Sarah Dillon, Faculty of English, Cambridge University, says:
“Congratulations to Davina Bacon on winning the 2018 BBC Young Writers' Award with First Story and Cambridge University. To capture in just 1000 words a character's present, past, and perilous future is a feat for any writer, let alone one 17 years of age. Stories like this show just how powerful this form can be - hitting you hard and fast, haunting you for long after.”
This is the fourth year of the BBC Young Writers’ Award which invites 14 – 18 year olds to submit stories of up to 1000 words. The award was launched as part of the tenth anniversary celebrations of the BBC National Short Story Award and aims to inspire and encourage the next generation of writers.