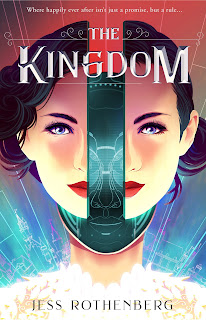 It's great to join the blog tour for The Kingdom, as I had so much fun reading this book! It has a fast-paced narrative interspersed with court transcripts, interviews and other interesting snippets. It's also told from the very unique perspective of an AI character. I'll hand over to Jess now, to explain a bit more about this brilliant book.

Tell us about The Kingdom.

The Kingdom is a blend of sci-fi, fantasy, romance, and courtroom thriller—think Westworld meets Disney World meets the Serial podcast for teens—and is set in a futuristic theme park where seven half-human, half-android Fantasists (picture Disney princesses, but bioengineered with advanced artificial intelligence) have been created to make guests’ wildest dreams come true, no matter what. But when one of the Kingdom’s most beloved Fantasists, Ana, is accused of murdering a young park employee named Owen she ignites the trial of the century. Did she do it? Could she do it? The truth is dangerous… and nobody wants the Kingdom to fall.

What inspired the futuristic subject matter?

Well, the initial inspiration behind the book is that my mom worked at Disney one summer when she was in college, and I always loved her stories of what really went on behind the scenes. The idea of this happy, perfect-seeming fantasy land with plenty of secrets lurking below the surface has always stuck with me.

But in terms of The Kingdom’s futuristic elements, I’ve always been a bit of a pop science nerd and can’t help feeling both fascinated and a little bit terrified of how reliant we’ve all become upon our technology—and how quickly that technology seems to be changing, learning, evolving. What might this all look like in another fifty years or even less? It honestly doesn’t feel like that much of a stretch to imagine the line between humanity and technology becoming blurred to the point where the current code of ethics no longer quite applies. I mean, I already feel guilty every time I forget to “feed” (i.e. charge) my son’s surprisingly cute toy robot, Cozmo. But what will happen when the robot eventually looks and acts like a real dog? Or when Alexa starts to know us better than our own family members? Or when Apple introduces its first ‘iFriend’ home assistant? To me, a dazzling, Disney-esque theme park of the future seemed a really fun and potentially scary setting to explore some of those questions.

The Kingdom has a very interesting narrative structure, with the first person narrative interspersed with trial transcripts. What made you decide on this structure?

I’ve always enjoyed stories that don’t quite follow the rules—books that blend genre and include mixed-media as part of their narrative structure. Ultimately, I wanted the read to feel as immersive as the park itself—experiencing Ana’s unique point of view as a Fantasist while simultaneously puzzling though the clues alongside members of the court to decide whether or not she is guilty (or even capable) of murder.

Can you recommend any other YA with science-fiction elements?

I’m a big fan of The Illuminae Files, by Amie Kaufman and Jay Kristoff. With its wildly creative mixed-media format (think hacked documents, military and medical records, emails, messages and maps) it’s truly a reading experience unlike any other. I also adore Empress of a Thousand Skies by Rhoda Belleza.

Can you give any writing advice to aspiring authors?

Make writing part of your daily routine. Try not to think about it too much, just sit down and begin. When it’s hard, take a walk, brainstorm with friends, have a dance party in your pajamas, and remind yourself why you wanted to be a writer in the first place: the magic, the fun, the joy, the connection. And when you’re not writing, read!

If you could create any ride in a theme park, what would it be and why?

I’d take Soarin’ at Epcot to the next level—just you, no hang glider—so you’d get to experience the insanely thrilling sensation of flying over cities, forests, oceans, pretty much anywhere on earth. In other words, the greatest flying dream brought to life. Just make sure you book a fast pass!

Will there be a sequel to The Kingdom? What are you working on next?

For now, The Kingdom is a standalone novel. But Ana’s world has plenty of possibility. You never know what might happen…. J

Thanks so much for answering my questions, Jess! A lot of those inspirations about the scary potential of AI and a dystopian Disneyland definitely came through the plot. I really hope there is a sequel!

If you're a fan of fun, high-tension YA sci-fi, I'd definitely recommend checking out The Kingdom. 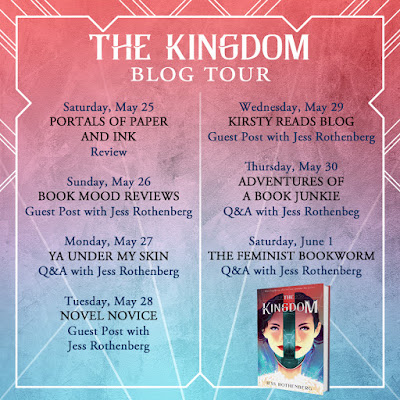