I had a fantastic time at the Tower of Dawn Waterstones event on Wednesday. Sarah J Maas and Samantha Shannon were both absolutely lovely and we heard so many interesting stories from Sarah. These are some of my favourite parts of the event. All of this is paraphrased from my hastily scribbled notes, so all errors are my own!

The photographs for this post were taken by my lovely friend Holly (who you can also see in one of them). You can find her on Twitter (@HollyStorm) or Instagram (sardothianqueenc). 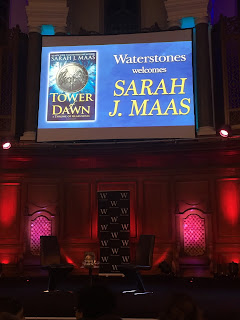 It turns out that Tower of Dawn was supposed to be a novella about Chaol. After a frenzied week of writing, Sarah had a 100,000 word draft! This doubled over the 9 months that she worked on the book. The timeline runs parallel to Empire of Storms and then Tower of Dawn goes further.

A Court of Frost and Starlight is coming out in May and it'll be about 60,000 words rather than a full-length novel.

Nesryn has become one of Sarah's favourite characters. Tower of Dawn gave Sarah the opportunity to explore epic fantasy and the southern continent through Nesryn's eyes. She always knew Yrene would come back and it was so hard to wait for her! Yrene's strength is quieter and there's something soothing about writing her voice.

Chaol's story was one of hope and healing. He starts at a low point, which Sarah has been planning for a while. To do this story justice, Sarah couldn't have squeezed it into Empire of Storms.

As Chaol is in a wheelchair, Sarah wanted to approach his story respectfully. She did a lot of research and read stories about wounded veterans. She has sensitivity readers and wanted to make it as accurate as possible.

The world building was quite different for Tower of Dawn. Sarah's known for years that it would have a Mongolian Empire feel but it's not a historical novel. Sarah is fascinated by Genghis Khan. In his empire, there was free, almost universal education. They also had a policy of religious tolerance. 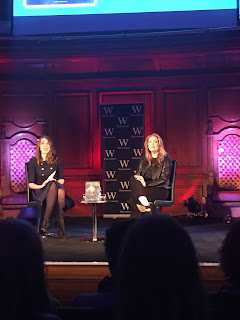 Sarah was raised by women with different kinds of strength. She told a fascinating story about her grandmother, who was a holocaust survivor. She was a Jewish child in Nazi Germany. Her family had tickets to England before the borders closed but her mother decided not to leave Germany because their family was there. Sarah's grandmother remembers her father being taken one night by the Gestapo, and they didn't find out what happened to him until after the war. Sarah's great grandmother got the children into an organisation that smuggled children out of Germany and put them on a train.

After living with a Belgian family, Sarah's grandmother ended up in the south of France. She refused to get on a boat to America until they found her brother. He ended up being only a couple of miles down the road. It wasn't until they saw the Statue of Liberty that she knew she was safe. She didn't know what happened to her parents, but eventually, her father found them. Her mother had sadly died during the war. Sarah said she felt honoured to tell her grandmother’s story, and is proud to be the granddaughter of an immigrant. Tower of Dawn is dedicated to her grandmother. Yrene is not based on her grandmother exactly, but bits of the story are hers. Yrene feels a moment of connection to the women who came before her, and one of the these women has Sarah’s great grandmother’s name.

I've told this story pretty much in full because it really moved me, and I was touched how open Sarah was about her family's history.

Sarah’s grandma is her favourite person. She’s 87 now, and a tiny little lady. Still, she’s full of life, energy and curiosity despite the horrible things she went through. She still travels the world and wants to see everything. Sarah has learnt from her that it’s important to live life with your eyes and your heart open.

Sarah explained that she rarely gives bits of herself to a character, but she did give Aelin her hatred of fish! When Sarah wrote Heir of Fire, she realised that she started to like fish and now Aelin does too!

Samantha and Sarah discussed where in the world they would like to visit. Samantha would love to go to Venice, and to see the Northern Lights in Iceland. Sarah wants to visit Patagonia. When she travels, she likes to feel part of the hustle and bustle or visit places where no one is around.

In response to a fan’s question about accents, Sarah said that everyone in her head has the 'Lord of the Rings accent'. She jokes that whatever accent you imagine is the ‘hottest possible accent’ is the accent they have.

There was also a question about wedding scenes. Sarah learned when she was in high school that Jane Austen never wrote a wedding scene. Sarah tried in an early draft of A Court of Wings and Ruin and it was so cheesy! She has a plan for a spin-off book that may or not contain a wedding scene.

Apparently, her husband didn’t inspire any characters (despite popular rumours that Rhys is based on him). She said that when writing about Feyre and Rhys, she felt it was true love, which she could only write because she has it. Sarah feels lucky to have a partner that loves and respects her.

For the last book, Sarah has figured out when to bring familiar characters into the story when they will have the most impact. To prepare for writing the last book, she reread the series for the first time as published books. 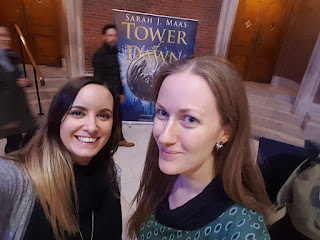 I really appreciated Sarah and Samantha both being so candid during the event, and found both of them fascinating to listen to! I can’t wait to read Tower of Dawn, and all of the other exciting books to come from Sarah and Samantha in the future!
Posted by YA Under My Skin