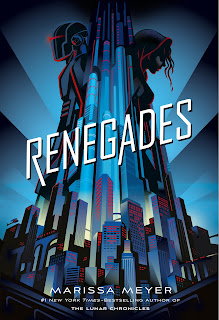 I received this book for free on Netgalley in exchange for an open and honest review.

The Renegades are a syndicate of prodigies—humans with extraordinary abilities—who emerged from the ruins of a crumbled society and established peace and order where chaos reigned. As champions of justice, they remain a symbol of hope and courage to everyone...except the villains they once overthrew.

Nova has a reason to hate the Renegades, and she is on a mission for vengeance. As she gets closer to her target, she meets Adrian, a Renegade boy who believes in justice—and in Nova. But Nova's allegiance is to the villains who have the power to end them both. (Publisher's blurb)

I couldn't have been more excited about this book - what could be better than one of my favourite authors writing about superheroes?

I was a bit slow to get into Renegades at first, partially because it took me a while to get to grips with who all of the characters were. When I did, I really liked the large cast! It was great to get an insight into the 'heroes' and 'villains', and to decide for myself who really fell into those categories. As usual, Marissa Meyer has created really interesting, likeable characters, and I enjoyed both Nova and Adrians' viewpoints.

The plot had a good balance of action and character development, and the witty dialogue kept me entertained. Renegades did a really good job of exploring different aspects of the superhero genre and I thought the range of powers was really inventive. Adrian's ability was my favourite, although I'd quite like to be invincible too!

By the time I got to the end of this, I was completely hooked, and I don't know how I'm going to wait for the next book in the series!

If you liked the sound of this, try Wonder Woman: Warbringer by Leigh Bardugo or Iron Man: The Gauntlet by Eoin Colfer.
Posted by YA Under My Skin