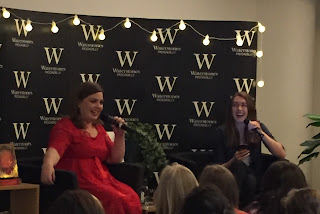 Alwyn Hamilton's Rebel of the Sands series is one of my favourites, so I was really excited (and a bit sad) to attend the launch for Hero at the Fall at Waterstones Piccadilly. I've already read and loved the book, and you can read my review here.

There was a great atmosphere in the room, with drinks and fan art cupcakes throughout the night. Waterstones Piccadilly were fantastic hosts as always and Samantha Shannon asked a really interesting range of questions.

Alwyn feels a real sense of satisfaction on finishing the series and feels that she's rounded everything up how she wanted. It's been a long time writing one protagonist, so it's time to make new fictional friends! 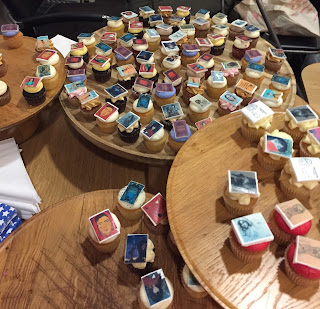 She wrote six books before Rebel of the Sands, all of which were the starts of a series. She'd never written a second or third book but learnt something from all of the other projects. Alwyn's original idea was that this series would be one book that ended with the rebellion. Hero ended where she always intended the story would finish.

Alwyn's favourite part of the publishing journey has been knowing that she could write a second book and talking to people about her books, because it feels like you write in a vacuum sometimes.

Hero was probably the hardest book to write, as all the threads needed to be brought back in. Coming up with the title was challenging too (and Renee Ahdieh helped!). Alwyn always knew the titles were going to start with Rebel, Traitor and Hero because history is a matter of perception. If a rebellion succeeds you're a hero and if it fails you're a traitor. 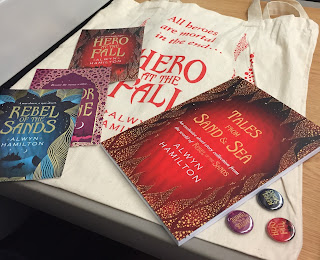 Samantha asked an intriguing question about whether Alwyn ever considered Amani fighting for herself, and not someone else. to be on the throne. In the first book, Amani had to learn to be less selfish, so it wouldn't make sense for her to have a leadership role. Alwyn wasn't even sure Amani was ready for a readership role by the third book!

Alwyn felt there's sometimes hesitance for a female character to be flawed and she really wanted that in the first book. It was also really important to her to have other women in the rebellion, and Alwyn very soon decided that she wanted Shazad and Amani to be friends rather than antagonists. Shazad was like Amani could have been if she'd had more support.

An audience member asked a really fun question about which Hogwarts houses the characters would be in. Most are in Gryffindor (including Amani and Jin), the Sultan and Leila are in Slytherin, Rahim and Shazad are in Ravenclaw and Sam is a Hufflepuff who wants to be a Gryffindor. 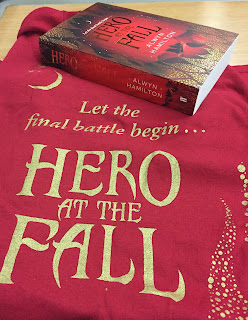 I had a fantastic time at the event and I have a giveaway on Twitter if you would like to win the gift bag we got at the launch and a signed copy of the book (which are in the two photographs above)!
Posted by YA Under My Skin