I am Thunder by Muhammad Khan - review 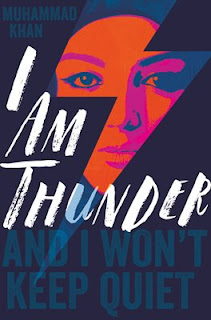 Fifteen-year-old Muzna Saleem is passionate about writing and dreams of becoming a novelist. There’s just one problem - her super-controlling parents have already planned her life out for her:

Step 2) Qualify as a doctor

Step 3) Marry a cousin from Pakistan. Oh, and boyfriends are totally haram.

No one is more surprised than humble Muzna when high school hottie, Arif Malik, takes an interest in her. But Arif and his brother are angry at the West for demonizing Islam and hiding a terrible secret. As Arif begins to lead Muzna down a dark path, she faces a terrible choice: keep quiet and betray her beliefs, or speak up and betray her heart?

If I'd read this book sooner, it would've made my post of books of the year. It's powerful and thought-provoking, with an incredibly believable voice.

It's a while since I've read a book this compelling. The plot is utterly gripping, and at times hard to read because of the experiences that Muzna has. I am Thunder deals with a tremendously difficult subject in a realistic, unflinching manner, at the same time as being empathetic.

I'm still thinking about Muzna as a character. Her thought processes and voice were very believable to me, and this book made me think a lot about the treatment of young Muslims by people who don't share their beliefs and those who do.

This is an incredible book, which is enjoyable at times and heart-wrenching at others. Everyone should read it.