How to Hang a Witch by Adriana Mather - review 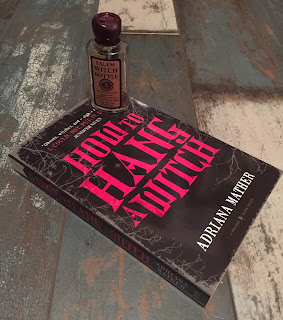 Publisher: Walker Books (4th January 2018)
I received this book from the publisher in exchange for an open and honest review.

The trials of high school start to feel like a modern-day witch hunt for a teen with all the wrong connections to Salem's past in this thrilling, creepy and romantic New York Times bestseller.

"I am utterly addicted to Adriana Mather’s electric debut. It keeps you on the edge of your seat, twisting and turning with ghosts, witches, an ancient curse, and – sigh – romance." Jennifer Niven
After Sam's father is hospitalised, she has to move from New York to Salem with her stepmother, Vivian. Unfortunately, Sam is related to Cotton Mather, one of the men responsible for the Salem Witch Trials, and to say she feels unwelcome in Salem is an understatement... She is particularly unnerved by The Descendants, a mysterious and tight-knit group of girls related to those persecuted in the Trials. At the same time, she must deal with Elijah, the handsome but angry ghost who has appeared in her house, and her new neighbour Jaxon only complicates things further.
When a centuries-old curse is rekindled, Sam finds herself at the centre of it. Can she stop history repeating itself? (Publishers' blurb)

This book has been described as 'Mean Girls meets history class' by seventeen magazine, and that's a pretty accurate description! I've always been fascinated by the Salem Witch Trials, and this book does a great job of fusing elements from the past to a fun contemporary story.

The historical elements were the real highlight of this for me, and I loved the fact that the author is actually a descendent of a witch hunter from the Salem Witch Trials. I really liked how historical events and characters impacted on the modern day events.

I also thought this book had a really compelling plot, and I enjoyed trying to work out what was causing the curse. The book felt fast paced, and I read it really quickly. There were a couple of plot elements that felt familiar from similar books, but overall I felt this was a new take on the subject matter.

How to Hang a Witch was an enjoyable, intriguing read and I'll definitely read the sequel (which is already out in a previous edition).

If you liked the sound of this, try The Graces by Laure Eve.
Posted by YA Under My Skin

Email ThisBlogThis!Share to TwitterShare to FacebookShare to Pinterest
Labels: ARC, witches, YA