More Happy Than Not by Adam Silvera – review 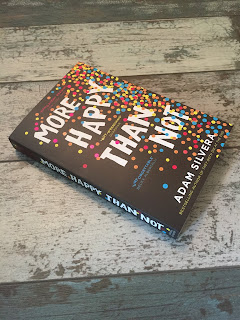 In the months after his father's suicide, it's been tough for sixteen-year-old Aaron Soto to find happiness again--but he's still gunning for it. With the support of his girlfriend Genevieve and his overworked mom, he's slowly remembering what that might feel like. But grief and the smile-shaped scar on his wrist prevent him from forgetting completely.

When Genevieve leaves for a couple of weeks, Aaron spends all his time hanging out with this new guy, Thomas. Aaron's crew notices, and they're not exactly thrilled. But Aaron can't deny the happiness Thomas brings or how Thomas makes him feel safe from himself, despite the tensions their friendship is stirring with his girlfriend and friends. Since Aaron can't stay away from Thomas or turn off his newfound feelings for him, he considers turning to the Leteo Institute's revolutionary memory-alteration procedure to straighten himself out, even if it means forgetting who he truly is.

Why does happiness have to be so hard?


This is my first Adam Silvera book, and I'm thrilled that I get to go back now and read his others. This is contemporary YA at its absolute best, with a brilliant voice and plenty of heartache.

It's rare for a book to evoke the setting and characters so vividly. I could picture the estate where Aaron lived and even the most minor characters were captured perfectly. Details about Aaron were revealed gradually, so it felt like I knew him really well but the narrative wasn't overpowered by backstory.

The relationships in this book were also realistically complicated and 'gut-wrenching' (as it's so accurately described on the cover). There was a definite sense of realism, with no characters that fit into labelled boxes or storylines that were all neatly tied up by the end.

One of the most inventive aspects was the sci-fi element surrounding the intriguing Leteo Institute. It's fascinating to experience a world so much like ours with one major scientific advancement that influences the plot and characters so fundamentally.

Reading this book was an emotional experience and I can't recommend it strongly enough.

Thank you so much to Simon and Schuster for the review copy!
Posted by YA Under My Skin