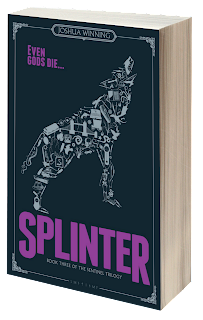 With Joshua's Winning's critically acclaimed Sentinel Trilogy coming to an end with Splinter, it's a pleasure to host a guest post from Joshua as he shares his favourite YA trilogies of all time.

Favourite YA trilogies
by Joshua Winning

It seems like the YA trilogy is a dying breed at the moment, but it shouldn’t be! I grew up on them, devouring everything from The Whitby Series to RL Stine’s The Babysitter books (which then unexpectedly turned into a quadrilogy!).

I love the way trilogies work: the best ones deliver three distinct stories while telling an overarching story that ties everything together. They’re also, as I discovered with The Sentinel Trilogy, massively complicated to write. There were times I despaired and wondered what monstrous thing I had created. But when I finished up edits on the final book, Splinter, I felt a quiet sense of pride at having done it. I made it to the end, and I think the final book is a corker.

In celebration of the books I love, and that showed me the way, here are my favourite YA trilogies...

Tales from the Wyrd Museum by Robin Jarvis

Robin Jarvis is my hero. He’s the reason I write fantasy, and he’s pretty much entirely responsible for developing my vocabulary as a teenager (the man loves a long word). This series interweaves Norse mythology with grubby British history, plus a talking raven you can’t help falling in love with, and some of the most beautiful language I’ve ever read. The Raven’s Knot, the second in the series, is my favourite, mostly because I love the idea of the terrifying crow women.


Half Bad by Sally Green

I devoured the first book in two days. It was the first time that had happened since I was a teenager, and it revitalised my love for reading and fantasy. Sally Green has talked about knowing how to write gritty tales, and she’s completely right – Half Bad is dark and upsetting in places, but there’s hope as well. I also shipped the Nathan/Gabriel relationship HARD (in fact, this series directly helped me feel brave enough to spell out the fact that the hero in Sentinel is queer), and there are so many images from this series that have stuck with me.

My old housemate recommended this to me a few years ago when we lived together and I remember being totally hooked on them. Sonea is a fantastic heroine and I loved watching her come into her own over the course of the books. These books are LONG but they’re so wonderfully textured, and I love the way Canavan describes magic.

When I stumbled across the Grisha Trilogy, it had been a while since I’d read any ‘high fantasy’. I was lured in by the concept of a world inspired by Russian culture, and I loved Alina from the start. Book two, Siege And Storm, lost me a little in the middle, but book three came back with a bang and sent the trilogy on its way brilliantly. I’ve just started Six Of Crows, too, and I’m loving being back in that world.

Patrick Ness can do no wrong. He’s got this insane ability to marry plot with character and devastating emotion, which is probably why he’s so successful. The Chaos Walking trilogy is him doing ‘epic’, and doing it ridiculously well. I don’t think I’ve wanted to howl with laughter and then with outrage more with any other series – there’s a death at the end of book one that still haunts me. Damn you, Ness!


Thank you so much Joshua! That post has given me a mixture of nostalgic feelings (where are my old Point Horror books?) and some new additions for the teetering TBR pile.

I'm in need of a fantasy series and I love discovering one that's completed so I don't have to wait! The ebook for Sentinel, the first book in the series, is currently 99p, so this is the perfect time to give them a try!

Check out the banner below for the other stops on the blog tour. 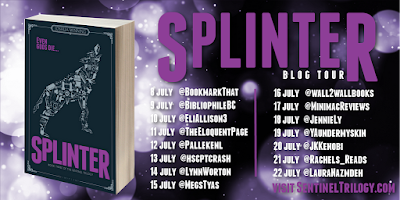