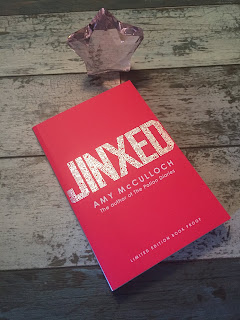 Lacey Chu has big dreams of working for the company behind the 'baku' - a customizable smart pet that functions as a phone but makes the perfect companion for its user. The only problem is, she's just been rejected from Profectus Academy - the elite academy for

Then Lacey meets Jinx... Jinx is an incredibly advanced cat baku who opens up a world that Lacey never knew existed, including entry into the hallowed halls of Profectus. But what is Jinx, really? His abilities far surpass anything written into his coded. He seems to be more than just a robotic pet.

This is my favourite Amy McCulloch book yet! Jinxed is a fast-paced, inventive read with fantastic world building.

I'm a huge fan of books about girls in STEM and Jinxed took it a step further by having the main character, Lacey, look up to Monica Chan, a female CEO. Lacey is a brilliant main character who is smart, resourceful and relatable.

The world of this book was also vividly realised. I loved the idea of bakus and what it said about this society that a person's worth was measured by the baku they could afford. The elite academy setting is also a favourite of mine and Profectus was a fantastic backdrop for the story.

Another thing that really sets this book apart is the creativity of the technology. It's such a clever idea to combine the idea of a companion, similar to a daemon in His Dark Materials, with modern developments. The idea of artificial intelligence and what makes something 'alive' was definitely thought-provoking (and I hope some tech company reads it and finds a way to invent bakus).

Jinxed is an exciting start to the series and I'd love to see more YA books about tech. While I wait for the sequel, I think I'll finally read the Potion Diaries books, as I've heard amazing things about them too.

Thank you so much to Simon & Schuster Children's UK for the gorgeous limited edition proof!

If you would like to read an extract from Jinxed, you can check out my blog tour post here. Please note that the giveaway has now ended.