One Would Think the Deep – review and giveaway 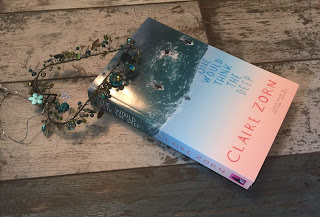 It's 1997 and Sam is supposed to be going into Year Twelve, Year Twelve, listening to Jeff Buckley far too loud and staying out skating with his friends until late. But instead, after the death of his mother, he finds himself moving from Sydney to the coast to live with estranged cousins Minty and Shane. Confused, alone and grieving, Sam starts surfing with Minty to ease the static in his head. But out of the water, he finds hostility and suspicion practically vibrating from every corner. What exactly happened seven years ago that tore such a rift in the family? In the face of hostility and loss, Sam is able to escape in the water – and even in love. Will he find a way through? Will he sink or swim?

This book represented a lot of firsts for me. Although I love surfing, I've never read a book about it. It's also my first Australian YA book and is about grief, a subject matter I sometimes avoid.

I think the treatment of grief is one reason why I enjoyed this book so much. Sometimes, I find books about the grieving process too difficult to read, but this handled the subject with an incredible degree of sensitivity and realism. It also felt uplifting and I took the message from it that grief is only one part of you, and that it's possible to grieve and have hope.

The setting was also beautifully described, as evidenced by how much I want to visit Australia now. It also captured the sensations of surfing using sensory, visceral descriptions.

I really liked these characters and felt that the writing revealed their qualities and backstories in a gradual way that kept my interest. The question about Sam's family history also added another level of intrigue.

This book has made me more open to reading books about difficult subject matters, if they're given as much empathetic treatment as they are in this case. One Would Think the Deep is an incredibly written, evocative book that engaged a whole range of my emotions.

Thank you so much to Raven Books for asking me to review One Would Think the Deep. I'll definitely seek out more books from your imprint and from Australian authors.

The amazing people at Raven Books have given me an extra copy to give away. Head over to my Twitter account (@yaundermyskin) or comment below to enter. The giveaway is open internationally and ends on 22nd August at 8am GMT. Good luck!
Posted by YA Under My Skin