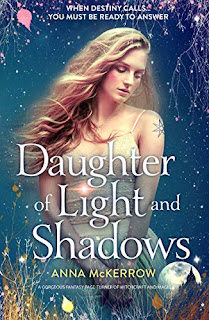 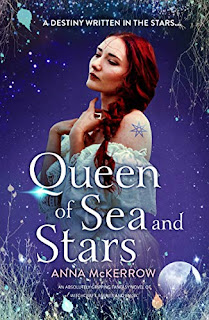 Today is my stop on the Queen of Sea and Stars blog tour, an adult series that I'm really excited to read (and I adore the covers!). I've got a Q and A with Anna about her brilliant books, recommendations and writing process.

Tell us about Queen of Sea and Stars.It’s the second in the Elemental Kingdoms series and follows the main character Faye Morgan as she moves temporarily down to London to be with her new boyfriend and get away from the drama at home in Abercolme, a small village on the Fife coast. Faye is a hereditary witch who runs a witchy shop there called Mistress of Magic, and in book one realises that she is connected to the faerie realms. In fact, she’s half-faery. Yet the faerie kingdoms are very dangerous, so Faye and Rav quite rightly feel that by the end of book1 (Daughter of Light and Shadows) they need a bit of a change!

Fortunately/unfortunately, depending on your point of view, it’s not that easy for Faye to leave the faerie kingdoms, and in London she still finds it calling to her. She meets a coven of London witches, and in a ritual on Hampstead Heath (a regular venue for covens and lone witches) she finds herself drawn back into faerie, but this time, somewhere rather different to before. There is an increasing peril both for her and for others in being in the faerie realms (which I won’t spoiler for you here) and Faye finds that she has to make some pretty difficult choices to be true to herself and save herself and her friends from rather unpleasant fates.

Where book 1 was set in the wild Scottish landscape, book 2 is a real celebration of being a city witch, and of some of the magical places in London.

What draws you to write about magic and romance?I always write about magic, because I think it’s important to put magic as a real life activity, rather than a fantasy subgenre, out there on the page. People are doing magic of all kinds all the time – meditation, visualisation, journeying, ritual, connection with gods, devotional practices, religious practices – which are important to them, across a range of cultures. I dislike the modern idea that spirituality and religion is inferior to intellectual atheism. I don’t like the fact that witchcraft is seemingly only included in literature as fantasy or as negative. I try to challenge that.

What inspired you to write for adults?Honestly? The publisher of my YA series cancelled my trilogy immediately after book 2 was released which had a big impact on sales, as you can imagine. I initially went on submission with a middle grade novel after – every publisher said they really liked it but ultimately said no because the YA trilogy had sold low. Fortunately Bookouture liked my idea for this series and so here I am. Looking back, I’m actually relieved, as YA sells very little by comparison unless you are one of the bestsellers, and I really enjoy writing for adults. So it all worked out in the end!

Can you recommend any YA or adult books for readers who want more witchcraft?

I’d definitely recommend Circe by Madeleine Miller, which really captures a witch learning her craft over time – and is beautifully written, and a timely retelling of the myth. Alice Hoffman’s Practical Magic and The Rules of Magic are lovely – contemporary-ish New York family with magical gifts and a deep consideration of magic and relationships. In terms of real witchcraft, I would always point readers towards Dion Fortune’s occult novels which have yet to be bettered. Kala Trobe had an excellent collection of short stories out a while ago called The Magic Bookshop which may be out of print now. Also out of print but excellent on the old goddess traditions in England and King Arthur myth are Daughter of Tintagel by Fay Sampson and of course The Mists of Avalon by Marion Zimmer Bradley. Most witches I know love Outlander (books and TV) and I would encourage anyone who hasn’t read American Gods and Anansi Boys to read those and reflect on how few books we see that posit the radical ideas that gods and goddesses we see in mythology are alive and well, and able to be communicated with. Obviously, there is a ton of nonfiction I could recommend, but specialist publishers like Avalonia, Llewellyn, Moon Books, Weiser and Capall Bann are all excellent.

Do you have any advice for aspiring authors?

This is not a job for the faint-hearted. Actually, for most of us, it’s not a job at all, it’s something we do on the side of various other things. Be prepared for the fact you will probably not make much money from this at all – like, FAR below minimum wage. Find a rich partner who doesn’t mind supporting you, or parents that don’t mind you never moving out. It can take a really, really long time – ten years, more – to get to the book that becomes well known, or sells well, etc, if at all. Most advice for aspiring authors is ‘keep going, you’ll get there, put the hours in’ which is absolutely true. However, the flip side of that is that all the time you’re spending writing, and staying in part time/less demanding jobs that allow you to write, means that you’re not going for that well paid job, you’re not spending time with your family, you are most likely making decisions as to holidays and social activities because you can’t afford to do them… and so on.

Even if you sell a book and it gets a big advance – the dream – writing isn’t a job with a steady paycheck. You might not get one of those big cheques again, and it absolutely doesn’t guarantee you’ll get another book published. Basically, the economics of writing are terrible, which means we don’t end up reading books from many talented authors because they simply cannot afford to work and not be paid, or they can’t live with the ongoing instability of this kind of creative career. The longer I’m a writer, the more I realise that publishing (rather than the craft of writing itself, a wonderful and beautiful thing) is less about talent and more about commercial trends and who can afford to hang in there longer.

In addition, you live with constant rejection, envy of other writers, reading awful reviews of your work and worrying that your book isn’t selling well enough, or getting overseas deals, or being nominated for awards etc etc, so it takes a philosophical attitude and a lot of determination to get through.

For writers reading this, I wish you all the luck and success in the world, but I also think that if you’re in a position to have an actual stable career that you’d really enjoy, like dentistry or surveying, then do that.

I currently write two days a week, 9–2 and sometimes in evenings. I aim for a minimum of 2000 words a day but will frequently write more, so up to 4000 a day really. I write mostly in a linear progression and then edit and move bits around etc. A lot of my “good” writing is in the editing stage!

If you could have any magical power, what would it be and why?

We all have magical powers! The tragedy is that more people don’t have this view.

What are you working on next?

I’m working on a witch-themed cozy mystery for Bookouture, which is out in October.

Thank you so much Anna! I always love getting recommendations and advice from authors (and appreciate your honesty!).

If you would like to check out other stops on the blog tour, you can use the banner below. 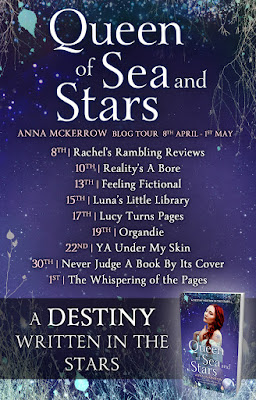