Songs about a Girl by Chris Russell Review 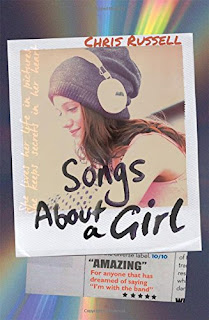 Heartbreak, romance, fame and pop music - for anyone who's ever dreamed of saying 'I'm with the band'.
Charlie Bloom never wanted to be 'with the band'. She's happiest out of the spotlight, behind her camera, unseen and unnoticed. But when she's asked to take backstage photos for hot new boy band, Fire&Lights, she can't pass up the chance.
Catapulted into a world of paparazzi and backstage bickering, Charlie soon becomes caught between gorgeous but damaged frontman Gabriel West and his boy-next-door bandmate, Olly Samson. Then, as the boys' rivalry threatens to tear the band apart, Charlie stumbles upon a mindblowing secret, hidden in the lyrics of their songs ... (Publishers' Blurb)

I received this book for free from Netgalley after hearing really great things about it. This book came along exactly at the right time as it's light, romantic and absolutely perfect as a summer book. It only took me a day to read because I got completely hooked!

As a teenager (and sometimes now) I was a massive fan of boy bands and I loved the idea of a behind the scenes. This story was the ultimate in wish fulfilment, with Charlie stumbling into the world of 'Fire and Lights'.

The characters in this were fantastic! There were plenty of likeable boy band members to fall in love with and I found Charlie really easy to relate to. I felt that Charlie's best friend could have been developed further than her interest in Fire and Lights.

The love story in this was really compelling (I must not be completely over YA romance) and I enjoyed trying to work out who Charlie was going to choose.

Another really interesting aspect of this book was the use of technology in positive ways (to promote the band and Charlie's photographs of them) but also how technology can be used in a cruel, damaging way. I'd like to see much more of this in YA as it unfortunately reflects reality!

Lyrics were woven into the narrative and I liked the plot line related to them. I also just discovered that these are real songs by the band the Lightyears that Chris Russell is a member of! How amazing is that?

I'd highly recommend this as a book if you're in the mood to switch off from the world and indulge in a really fun read! Now excuse me while I go to listen to the Lightyears...

If you liked the sound of this, now try Love Song by Sophia Bennett.
Posted by YA Under My Skin