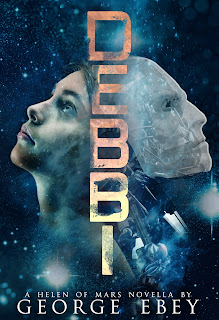 This is the second of my StoryTime blog tour posts and I'm so happy to have taken part! DEBBI is another fantastic novella that makes me desperate for the upcoming novel 'Helen of Mars'!

Here's a short bio of the author:

George Ebey has been creating alternate realities since a young age.  It all began when he started taking his once-vast collection of action figures on epic journeys though countless lands full of exotic wonders and hidden dangers. Today, his action figure collection is much smaller, though several still stand guard on his writing desk, ready to take up arms and march into the fray at a moment’s notice.
George was born and raised in Ohio, where he still lives with his wife and an ornery cat named Ollie. When he’s not writing or playing with his action figures, he enjoys being outdoors, studying history, and searching for new and interesting places to explore. (Publishers' Bio) 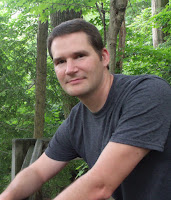 A game to end all games. On the line: her family’s future. Will Helen’s creation be enough to win the day? Or will she lose, and take her family down with her?

Helen's father has signed up to send a robotic rover to Mars, risking their family's wealth and prospects. Helen enters a junior gaming competition for the chance to win a one year lease on a Mars rover, which would save her family from risking everything. She enters her newest robot, a rover called DEBBI into the simulated battle competition.

I knew this was going to be my kind of book and I'm so excited to read more about this world!
Tech is not my strong suit but I found the explanations of the robot technology and the competition accessible and fascinating. The concept of mining on Mars interested me because it feels like something our oversized corporations would want to do.
I'm really interested in the history of the 1849 gold rush to California and I love the idea of a sci-fi version of this! The novella alluded to lawlessness and people using their rovers to steal from others, which is a potentially exciting twist. My only issue with this is that with the humans steering the rovers from Earth, will this distance readers of 'Helen of Mars' from the action?
The robot battling competition was really exciting and I loved the raised stakes of what Helen's family had to lose if she lost the competition. Within the robot battles, there was a friendship dynamic between Helen and her teammate that I really liked. My favourite parts of the battle were those from the robot's point of view, as this felt like quite a unique perspective to explore.
I really liked the premise and action of this novella and will definitely look out for Helen of Mars!

Check out my blog tomorrow for a cover reveal and teaser for Unnatural Soul by Linda Foster.