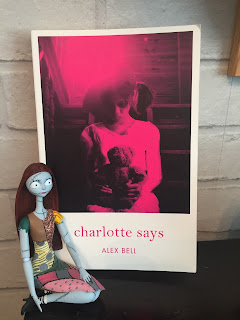 I received this ARC from the publisher in exchange for an open and honest review.

Following the death of her mother in a terrible fire, Jemima flees to the remote Isle of Skye, to take up a job at a school for girls. There she finds herself tormented by the mystery of what really happened that night.


Then Jemima receives a box of Frozen Charlotte dolls from a mystery sender and she begins to remember – a séance with the dolls, a violent argument with her step-father and the inferno that destroyed their home. And when it seems that the dolls are triggering a series of accidents at the school, Jemima realizes she must stop the demonic spirits possessing the dolls – whatever it takes. (Publishers' blurb)

I love being terrified: horror films, haunted houses and ghost tours are the perfect ways to get my adrenaline pumping. It isn't often that I'm genuinely scared, and then Frozen Charlotte came along and I was seeing the blur of moving dolls in my peripheral version. Charlotte Says is the same perfect combination of scares, shocks and building tension.

I think this is the first prequel horror novel that I've read, and it worked really well. If you haven't read Frozen Charlotte, I still recommend reading that first. It was really exciting to see elements of Frozen Charlotte being developed and explained in Charlotte Says.

Alex Bell has an amazing talent for setting the scene, and she uses the remote location on the Isle of Skye to it's full creepy potential. The scares come gradually as the unease unravels, and Jemima starts to realise the horrible truth about the Frozen Charlotte dolls.

Another thing I love about this book is that Frozen Charlotte dolls are a real thing, based on a wonderfully disturbing poem about a girl who freezes to death. It was such a clever idea to take this disturbing reality and turn it into a novel. Again the execution was great and I loved the fact that these real elements were worked into the plot.

I'm really excited to read The Polar Bear Explorers' Club by Alex Bell (which is aimed at younger readers and waiting on my tbr pile) but I also hope that Alex Bell writes more horror. This a perfect read for the build up to Halloween (yes I've started counting down) and is now one of my favourite YA horrors.

If you're in the mood for more YA horror, try The Dead House or The Creeper Man by Dawn Kurtagich.