The Loneliest Girl in the Universe by Lauren James - review 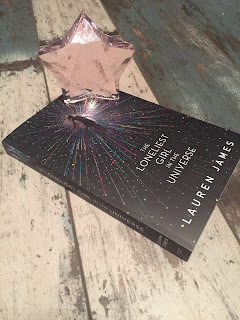 I received this book in exchange for an honest and open review, and I'm so grateful to Walker Books for sending it.

Can you fall in love with someone you've never met, never even spoken to – someone who is light years away?
Romy Silvers is the only surviving crew-member of a spaceship travelling to a new planet, on a mission to establish a second home for humanity. Alone in space, she is the loneliest girl in the universe until she hears about a new ship which has launched from Earth – with a single passenger on board. A boy called J.
Their only communication is via email – and due to the distance between them, their messages take months to transmit. And yet Romy finds herself falling in love.
But what does Romy really know about J? And what do the mysterious messages which have started arriving from Earth really mean? Sometimes, there's something worse than being alone... (Publishers' blurb)

When I started reading this book, I had no idea what to expect. I'd heard that it was incredible without knowing anything about it. One of my favourite things is that even after reading I still don't know how I'd categorise it. The Loneliest Girl draws on several genres and is a compelling, unpredictable read.

I usually find that I have some idea about where a book is going, and I loved that I couldn't predict this one at all. The short chapters and extracts of fan fiction also contributed to this book being impossible to put down. Tension gradually creeps up and builds to a feverish intensity by the end, made all the more suffocating by the space ship setting.

The voice of this book also feels realistic and relateable. It was so great that it dealt with subjects like mental health, periods and the effects of isolation in a sensitive, believable way. I wish this came up in more books with genre elements.

Romy is one of my favourite YA characters of all time. I wish this book was around when I was a teenager - I would've related so much to Romy (even more than I do now). Her reactions to everything were understandable and I felt like I really knew her by the end of the book. There was a really good balance of backstory and forward momentum of the plot.

This was an absolutely brilliant book that I'm already planning to read again.

If you liked the sound of this, try the Across the Universe series by Beth Revis.