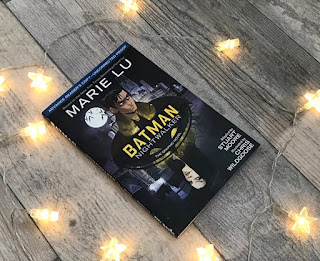 A new ruthless gang of criminals known only as Nightwalkers are terrorizing Gotham and the city's elite are being taken out one by one. On the way home from his eighteenth birthday party, newly-minted billionaire Bruce Wayne makes an impulsive choice that puts him in their crosshairs and lands him in Arkham Asylym, the once infamous mental hospital. There, he meets Madeleine Wallace, a brilliant killer...and Bruce's only hope. Madeline is the mystery Bruce must unravel, but is he convincing her to divulge her secrets, or is he feeding her the information she needs to bring Gotham City to its knees?

Illustrated by Chris Wildgoose and adapted by Stuart Moore, this graphic novel presents a thrilling new take on Batman before he donned the cape and cowl.

This was my first Batman graphic novel and it reminded me how much I love the world of Batman. Batman: Nightwalker is a fresh, enjoyable take on the story.

The characterisation in this book is great! I sometimes find it hard to connect with characters in this format but I really liked this younger Bruce Wayne and adored Madeleine! The interactions between them were some of my favourite parts of the book.

I also really enjoyed the plot, which was complimented by Chris Wildgoose's beautifully detailed illustrations. The pace is fast and I couldn't stop reading, but are were also quieter moments for character development and reflection.

The illustrations are mostly black and white with striking touches of yellow, and I found the style really effective. Characters' emotions are revealed through their facial expressions and the Gothic backgrounds are stunning!

This is a fantastic addition to the Batman catalogue and it was fun to spot well-known elements from the world. It's definitely made me want to pick up Marie Lu's book that provided the inspiration for the graphic novel!

Thank you to Penguin Random House for the review copy!
Posted by YA Under My Skin