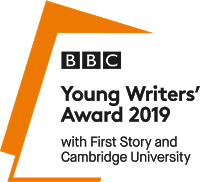 I’m so excited to be an ambassador for the BBC Young Writers’ Award for the second time. There's a great range of stories for 2019, with a focus on ‘the need for understanding and emotional connection’. The shortlist was announced live today on BBC Radio 1’s Life Hacks.

For the first time, a love of poetry and a desire to experiment with the short story form has been mentioned by each of the shortlisted writers, with 2018 Foyle Young Poet Georgie Woodhead featuring on the shortlist. The five stories – many deeply personal – range from the comic, to the lyrical, to the tragic, and are written by an all-female shortlist of young writers aged 16 and 17 years from across the UK.

‘Insula’ by Eleanor Clark, 16, from mid-Devon. This ‘rite of passage’ is told via a young woman’s journey from the safe community and almost magical island of her childhood to the brutal, isolation of the city. Evocative and sophisticated with a strong sense of place, the story laments the inevitability of growing up and champions the importance of rural communities.

‘Another Pair of Eyes’ by Tallulah Howorth, 17, from Macclesfield. Inspired by the true story of John Dalton, a Northern scientist known for his study into colour blindness who asked for his eyes to be preserved after his death, this is the strange and touching tale of a lonely archivist who becomes emotionally attached to ‘Dalton’s eyes’. Tender and funny, this unique piece of flash-fiction is short, yet beautifully realised.

‘The Blue of Spring Violets’ by Isobel Paxton, 17, from Edinburgh. Set in a psychiatric ward, this brutal, rich and sensory story explores the kinship of the patients as they find kindness, connection and humanity in their pain.

‘Allotment’ by Rowan Taylor, 16, from Reading. The story of a daughter’s changing relationship with her father after her parent’s marriage break-up, this beautifully told story shows the shift from desolation through sadness to new love as the seasons pass and new life, and hope, awakens on the father’s allotment.

‘Jelly-headed’ by Georgie Woodhead, 16, from Sheffield. ‘Jelly-headed’ is a comic, quirky and ultimately tragic story of two friends, a night out and a lightning strike that brings devastation. A story about guilt and the absurdity of life, this funny, subversive story is ultimately about searching for meaning or connection.

The five shortlisted stories, each under 1000 words, are available to read on the BBC Radio 1 website, and can be heard on BBC Sounds as part of the Short Works short story podcast.

The shortlisted writers will have their stories read by an actor and broadcast by BBC Radio 1, and available to listen to on BBC Sounds as part of the Short Works short story podcast. The stories will also be published in an anthology and the writers will attend a creative writing workshop with author and judge Patrice Lawrence, in addition to a session in a recording studio and a tour of Broadcasting House with BBC producers. All five teenagers will attend the exclusive BBC Short Story Awards ceremony with their families on Tuesday 1 October 2019, when the winner will be announced live on BBC Radio 4’s Front Row. There, they will have the chance to meet high-profile authors, publishers, agents and broadcasters at the award ceremony. The winner will also receive a personalised mentoring session with an author to enhance their writing skills.

The shortlisted stories can be read and listened to online at: www.bbc.co.uk/ywa
Posted by YA Under My Skin