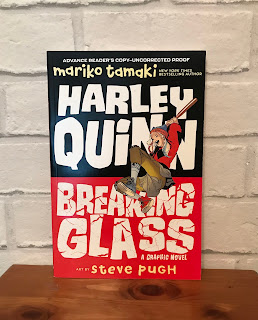 Harleen is a tough, outspoken, rebellious kid who lives in a ramshackle apartment above a karaoke cabaret owned by a drag queen named MAMA. Ever since Harleen's parents split, MAMA has been her only family. When the cabaret becomes the next victim in the wave of gentrification that's taking over the neighbourhood, Harleen gets mad.

When Harleen decides to turn her anger into action, she is faced with two choices: join Ivy, who's campaigning to make the neighbourhood a better place to live, or join The Joker, who plans to take down Gotham one corporation at a time.

Harley Quinn: Breaking Glass is at once a tale of the classic Harley readers know and love, and a heartfelt story about the choices teenagers make and how they can define--or destroy--their lives. This is the first title in DC's new line of original graphic novels for middle grade and young adult readers.

This graphic novel is such a fun read! The illustrations are amazing and I really enjoyed the plot surrounding a teenage Harley Quinn.

Harley Quinn is one of my favourite graphic novel characters and I'm especially interested in her origin stories. This book feels like such a fresh take on her teenage years and a plausible start for the Harley I know and love. Her dialogue is hilarious and the book captures her naivety and bravery.

Harley's friendship with Ivy was a highlight of this book for me. I haven't read many graphic novels that focus around female friendship and it's great to see their relationship develop from the start. Like Harley, I also liked the hints about how Ivy might end up as Poison Ivy.

This graphic novel uses a combination of muted colours and vivid reds really effectively to highlight scenes between different characters. The illustrations are really detailed and capture the character's expressions, perfectly complementing the dialogue.

The storyline about standing up for your community and the people you love feels very timely. Harley and Ivy are forces for change in their own ways. Some of my favourite moments are with Harley's drag queen friends from the neighbourhood, especially Mama.

This is a memorable, engrossing graphic novel and I hope there are more Harley Quinn stories from Mariko Tamaki, with Steve Pugh's gorgeous illustrations.

Thanks so much to Penguin for the review copy!
Posted by YA Under My Skin